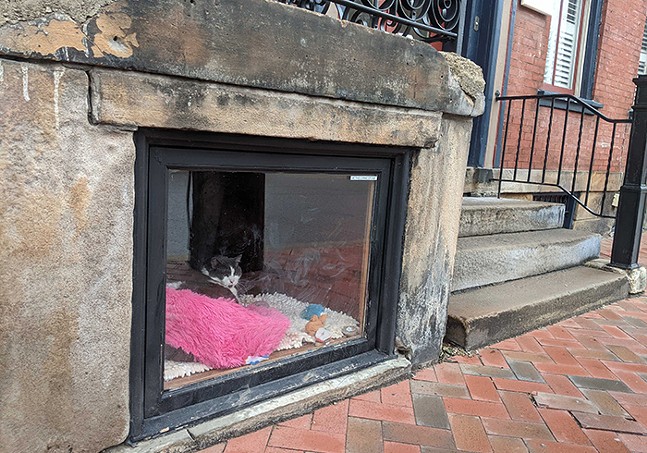 CP Photo: Lisa Cunningham
Ethel lounges in her sidewalk window on Western Avenue on Pittsburgh's North Side.
Ethel on Western Avenue, a minor North Side celebrity cat who has been a fixture of the street since late 2016, is finally getting the clout she deserves.

“This is my favorite house in Pittsburgh,” Twitter user @rosapolverosa tweeted on Jan. 10, alongside a picture of a sidewalk-level window under a stone stoop occupied by a lounging gray and white cat. Four days later, the picture had 400 retweets and almost 6,000 likes.

this is my favorite house in pittsburgh pic.twitter.com/RlWMWpq6aZ


Many immediately recognized the furred cutie in the tiny window as Ethel, of the hashtag #EthelOnWestern.

Ethel does, indeed, live on Western Avenue with her human caretakers, Erin Martier and her partner.

“Ethel was abandoned in the alley behind the house we used to live in,” Erin Martier, one of Ethel’s human caretakers, wrote to Pittsburgh City Paper in an email. “She started hanging around our backyard and was so scrawny that we started feeding her. In time, she looked like she wanted to come in the back door. We let her in, and she has been our cat ever since.”

Ethel also lives with another cat named Bunchy, who Martier said was “rescued from marauding tweens who stole him from his mother.”

“He seems to like Ethel, but she loathes him,” Martier added.

Ethel’s window on Western Ave is halfway between Nicky's Thai Kitchen and the Allegheny Sandwich Shop, and she’s lived there since December 2016.

The front stoop window is one of two sidewalk-level windows that came with the house. “The one under the stoop was probably a coal chute. The other was probably for light. The houses here predate wide use of electricity,” Martier said.

Ethel’s life today is much cozier and calmer than before she moved in with Martier. “Ethel was a daredevil in her former life as an alley cat,” she recalled. “She used to climb to the top of the cherry tree in our backyard and swat at birds as they flew by. She even found a way to the peak of the roof of our house [to] watch the street traffic 50 feet below.” Basking in the Western Avenue sun may seem uneventful compared to her past adventures, but plenty of Pittsburghers are delighted to see her in her current hangout.

“This is a busy street with a lot of foot traffic. Between her favorite window and the street, there is a telephone pole and parking meter that narrows the sidewalk space down significantly, so Ethel is pretty much in your face in that space,” wrote Martier.

“Since she first set up shop in that window,” Martier wrote, Ethel has had a “constant stream” of friends and admirers squat down to interact with her. “Dozens, maybe even scores of people stop to say hello every day. We mostly don't know them but we hear them outside talking to Ethel,” she added.

“Dogs never walk by without pushing their noses against the window, same with little kids. People leave her notes and gifts and once even a sketched portrait and someone painted a stone for her. … She loves the attention,” Martier explained. “That's why she spends so much time there.”