With a tightly curated menu, Noodlehead offers an elemental approach to the delightful street food of Thailand 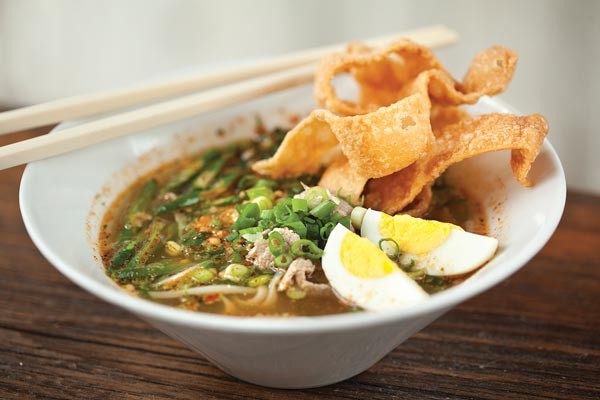 Nearly a decade ago, the opening of Typhoon on Shadyside's South Highland restaurant row seemed to signal a sea change in local Asian dining. It elevated Thai food from "ethnic" category to stylish cuisine, served with refinement in an artistic, upscale setting. In Typhoon's wake, other restaurants now provide a similarly splurge-worthy experience of Thai dining, while a new, far more humble but still delectable, trend has taken hold in the once-elegant space Typhoon occupied: noodles.

To say that Noodlehead isn't elegant is not to suggest that it isn't fashionable. But the recycled wood-plank walls, old-fashioned filament light bulbs, picnic-style utensil caddies and eclectic seating (from industrial stools to plastic-fantastic mod chairs) evoke a feeling more than a specific place or culinary tradition: simplicity, authenticity, rusticity, noodles.

Such rough-hewn chic does not necessarily come cheap, but by taking cash only, not accepting reservations, being BYOB and not even having a phone, Noodlehead is able to offer an elemental approach to the delightful street food of Thailand in which nothing is over $9.

Noodlehead's tightly curated menu is another part of this equation. It has four short sections: a pair of noodle soups at $6 apiece; five no-substitution noodle dishes for $9; three more with your choice of shrimp, chicken or tofu, also for $9; and five finger-food "snacks," each at about $6. You can try the entire menu for $104 — and, with the help of some holiday guests, we nearly did.

As their title suggests, the snacks are small plates, and good for sharing. Thai fried chicken came as a mound of moist, sliced cutlet, coated in a light, ultra-crisp crust that was delightful on its own and better with a generous dollop of sweet garlic-chili sauce. Pork belly steamed buns were actually less labor-intensive rounds of fluffy dough folded over several chunks of succulent pork belly in a smoky-sweet, barbecue-esque sauce, while paper-thin slices of house-pickled Asian cucumber added brine and tang.

An order of pig wings inevitably led to jokes about when pigs will fly. But these morsels of pork shank were worth the groaners. Butchered to resemble drumsticks, they were spicy and intensely flavored; unlike chicken wings, pork has more than enough robust flavor of its own even beneath minced herbs, spices and chilies. Perhaps disadvantaged by following the pig wings, garlic nam pla chicken wings were plump and crisp, but not especially flavorful.

After all these delights, it was noodle time. The 10 noodle preparations on offer included fully six different types of noodles, a testament to Noodlehead's commitment to its craft. Thin rice noodles were tender in both Sukothai and Love Boat soups; the former punched up the flavor quotient with sliced pork loin, slivered green beans, peanuts and hard-boiled egg in a spicy lime broth, while the latter relied on the rich savor of simmered beef and pork cracklings.

Linguini-like semolina noodles, the most similar to Western pasta, were tightly coiled with a green curry sauce which clung to them and to succulent bits of chopped arctic clam. Chiang mai curry was a creamy, warm, coconut-milk broth served over egg noodles with chicken, pickled mustard greens, shallots and a nest-like lattice of crispy matchstick noodles on top.

The pad Thai was one of the few dishes that wasn't at least a little bit spicy to start; to most, diners can increase the heat using a 1-5 scale on which 1 is "a li'l spicier," 4 is "Thai hot" and 5 is "crazy hot." No one in our party was brave enough to go that far, but we found levels 2 and 3 to be comfortably within the "not so hot you can't taste it" range; next visit, that's probably where we'll dwell.

Noodlehead succeeds deliciously in extending Pittsburgh's range of Thai options both downward in price and outward in quality. Its exploration of the versatile noodle is refreshingly focused, excitingly varied and wonderfully affordable.