Liam Neeson helps sell the ridiculousness of this mid-air actioner 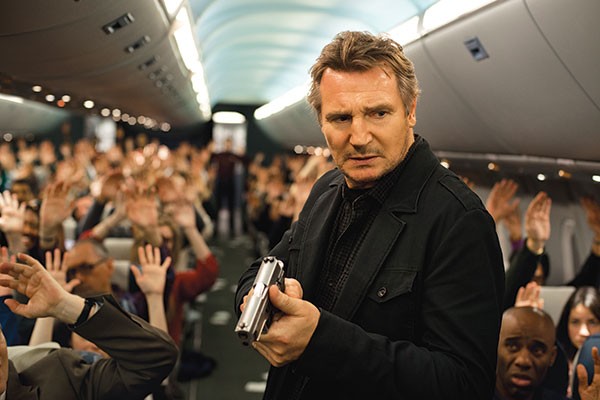 Raise your hand if you're the terrorist: Liam Neeson plays detective.
Directed by:
Jaume Collet-Serra

"Not an easier job in the whole federal government than riding first-class in airplanes." So says a voice on a radio program as this film opens, presumably carping about federal air marshals.

Bill Marks (Liam Neeson) might beg to differ. He's an air marshal, and his job sucks enough that he has to down booze in the parking lot before reporting to work. Even so fortified, he's still in a foul mood, snapping at fellow travelers and, later, grabbing an illicit cigarette in the plane's lavatory. Since you asked, he seals off the smoke detector with duct tape — and like almost everything else in Non-Stop, this makes sense until you actually think about it.

Once the flight is over the Atlantic, Marks gets a text message saying that unless $150 million is deposited into an account, a passenger will be killed every 20 minutes. And this gets real, in ... uh ... exactly 20 minutes. Now it's up to Marks to locate and neutralize the killer who is both on board and in his head. Unfortunately, everybody is acting suspicious: the helpful flight attendant (Downton Abbey's Michelle Dockery) giving side-eye; Marks' evasive seat-mate (Julianne Moore); and even the little girl who makes a scene about her stuffed animal.

Neeson pairs up again with director Jaume Collet-Serra, who helped launch the Irishman's late-in-life action-film career with 2011's Unknown. (The solid, stolid Neeson is the kind of canny action guy who brings an oxygen mask to a knife fight — and prevails!) Collet-Serra keeps this locked-room/ticking-time-bomb mystery moving at a good clip, finding a fair amount of space for brawls, panics and assorted kinetic activities, despite being confined to a narrow aluminum tube. (In fairness, Aqualantic Airlines appears to offer a roomier jet than those I've been squashed in.)

Non-Stop morphs from a bad day at the office to a compendium of mid-air horrors previously seen in various Airport films of the 1970s. (It's missing only the food poisoning from Airplane.) It's all fun until the last reel when, alas, the solution turns out to be not as good as the mystery. But Non-Stop continues the drama in a cheese-tastic way, and the preview-screening audience burst out clapping when the beleaguered airplane finally set down.

And like those lucky passengers disembarking, when the film ends, just walk briskly back into your own life. Do not look back — do not think about this story! It won't even hold together as far as the parking lot.