Noises Off at Pittsburgh Public Theater

This is a show specifically built to wow anyone who sees it. 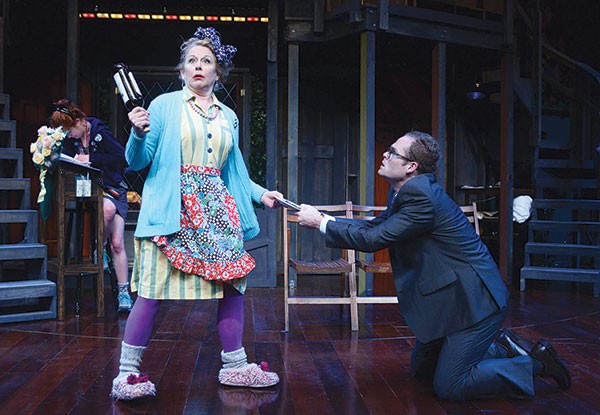 In Michael Frayn's 1982 farce Noises Off, now at the Public Theater, a British troupe performs the first act (and only the first act) of a sex farce called Nothing On three times.

The first act of Noises Off depicts the final rehearsal before the show goes on tour.

The second act takes place a month into the tour, and we see it from behind. The set (gorgeously designed by Michael Schweikardt) has spun around, and we witness the backstage lunacy of the cast navigating egos, libidos and a matinee.

For the third act, the set has been re-revolved, so we're out front again during one of the final performances before the tour shuts down.

That sounds more complicated than it is. Frayn, and the Public's director, Don Stephenson, never lose the audience. This is a show specifically built to wow anyone who sees it.

And it does, especially that second act, which is performed almost entirely without words (except the Nothing On lines). It's a dizzying, even dazzling, showcase for the mechanical brilliance of Frayn's craft.

Unfortunately for him, there's no way the other acts can compete. The first is really a set-up for the second, and the third is ... well, it seems like an afterthought. The Public has been very clever in presenting acts two and three without an intermission, so that the lingering euphoria goes a long way toward carrying us to the finish line.

This is a monster of a play, and Stephenson and his company present an impeccably timed, lightning-quick second act which more than gives Frayn his due.

Perhaps my biggest complaint is a lack of clear delineation between Noises Off and Nothing On in terms of style. There's some unsupported broad playing going on in the former which would really better suit the later ... although I did enjoy the work of actors Michael MacCauley, Preston Dyar, Garrett Long and Scott Cote.

What made me laugh the most, however, is this: Nothing On is clearly Frayn's scathing piss-take on all those smutty (and dreadfully unfunny) Ray Cooney-esque British sex farces ... and yet the audience was laughing at every purposely dreary joke. Someone ought to write a play about that.