No one has finished the Heinz Ketchup Puzzle, and I have 'proof' | Just Jaggin' | Pittsburgh | Pittsburgh City Paper

The press release reads: "Heinz recently stepped in to help people around the world pass the time by releasing the Heinz Ketchup Puzzle, an all-ketchup, 570-piece red puzzle. Due to an overwhelming response, a limited run of Heinz Ketchup Puzzles are now available for purchase online ... Heinz is making a $10,700 donation (107,000 meals) to Feeding America, which represents the U.S. profits of sales from the puzzle."

I consider myself a puzzler, maybe the only puzzler, since I just made the term up. I've completed or contributed to the completion of puzzles ranging from 500 to 1,500 pieces. (I'm also really annoying about it because I point out and celebrate almost every piece I get correct. So, shoot me an electronic mail if you want to experience that.) I've done landscape puzzles, candy wrapper puzzles, school of fish puzzles. After completing a Thomas Kinkade puzzle, I felt unstoppable. For you newbs, Kinkade's foliage-heavy painting is to puzzling as the cryptex is to The Da Vinci Code.

I was pretty confident opening the Heinz Puzzle box. I even set a timer on my phone to track my progress, planning to eventually brag about my speed in a story I expected to be much different from this one. That confidence slipped away faster than an eastern hellbender when I noticed something strange about the pieces. They all looked exactly the same!

I figured if I just started putting it together, the puzzle would eventually make sense. Incorrect. If so many of the pieces fit together, how am I supposed to know whether or not they are in the right spot? I sorted the pieces and found that there are only nine unique pieces to the center of the puzzle. I then tried to create the frame with the edge pieces. I went on the Heinz Puzzle website, counted the number of pieces on the bottom row, and tried to build that way. Still didn't work.

Then it was time for me to speak to the manager. I emailed my contact at Heinz to ask her if anyone who has received the puzzle posted a completed version online, as the winners of the puzzles were asked to do. Interestingly, "Lynne" (if that is her name) told me that they had DMed her completed puzzles. There's no chance of this.

The jig is up, Heinz! Until you can furnish a puzzle completed by a non-Heinz employee, this puzzler considers this puzzle impossible:

Photo: Heinz
How the puzzle is supposed to look
click to enlarge 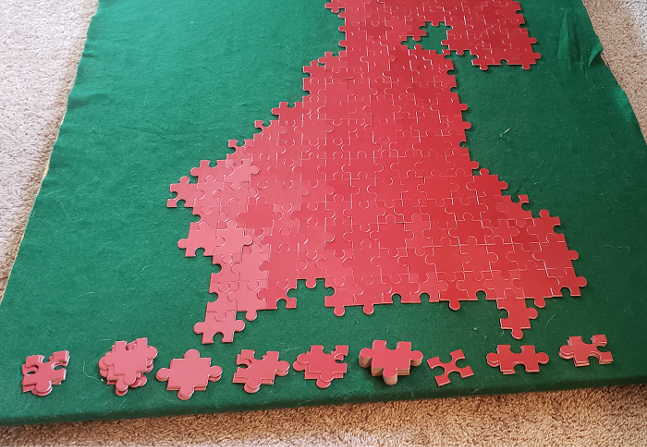 CP photo: Josh Oswald
How the puzzle actually looks when attempted by a human

If you have tried the Heinz Puzzle and inevitably failed, shoot me an email to discuss your conspiracy theory, especially if it is related somehow to chemtrails.