No need to get the jitters when eating these critter fritters 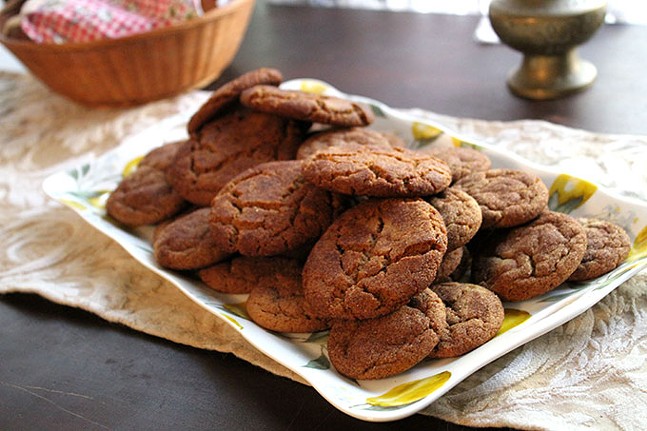 CP photo: Joie Knouse
Critter snaps - ginger snaps made with cricket flour
Tobin Seastedt’s apple fritters look like you might expect: fried to a golden brown, with a drizzle of icing soaking sweetly into hot dough. But when you bite into it, a worm might fall out.

Seastedt is the owner of Crickets to Betsy, a company rooted in entomophagy (the practice of humans eating insects). Everything she makes incorporates insects.

The baker/cook came across the idea by way of The Ellen Show, and three years ago, bought her first crickets. Seastedt dove in headfirst, freezing (so they “take the deep sleep,” she laughed), boiling, and roasting the insects, then mixing them into a batch of pecan bars. Since then, she’s experimented with savory and sweet recipes that use crickets, mealworms, and scorpions; her favorite so far is a spicy cricket tomato sauce.

Seastedt has no set conversion for bugs-to-bake. Each recipe reacts to the additional protein differently. Cricket pierogi dough, which turned out gummy and grey, currently holds the title of “worst.” Seastedt’s mealworm apple fritters are her latest success.

There’s no denying that eating bugs gives most people the heebie-jeebies, but the practice is actually fairly common in global cuisines overall. (The Food and Agriculture Organization of the United Nations [FAO] estimates that over two billion people eat insects daily.) Edible insects aren’t called the “future of food” for nothing; their benefits far outweigh any jitters.

Feed conversion ratio — the rate an organism can convert feed into output — for insects is very small, about 1.5-to-1 for a cricket. (Cows come in around 10-to-one.) Insects’ birth rates are higher, however, making them a more sustainable protein source, and they emit far fewer greenhouse gases than livestock. One cricket contains 60 to 70 percent protein, around 12.5 grams of protein per 100 grams of insect according to the FAO, similar to two tablespoons of peanut butter.

Adding bugs to daily diets would lower meat consumption and, in turn, cut carbon emissions from beef production. Sprinkling roasted crickets or powder onto pasta, ice cream, or into cookie dough takes away some of the sugary guilt, by adding substantial protein and calcium.

If a worm hadn’t fallen out the second I took a bite of Seastedt’s fritter, I might not have known it was made with bugs. It was exactly what an apple doughnut should be: springy and light, filled with chunks of apple and warm with cinnamon. Plus worm butts.
click to enlarge

Her critter snaps — ginger snaps made with cricket flour — were fantastic. They were expertly made, the top cracking in the oven and shimmering with a roll of sugar. The ginger masked any sign of cricket, and unlike other “healthy” sweets, there was no tinge of bitterness from added protein.

Lastly, there were chili-lime roasted crickets. It took a lot of courage to put the full bug in my mouth (thankfully, she chose crickets with the fewest legs). I’m not quite sure what I expected — maybe for it to fly away — but it offered a slight crunch followed by a punch of spice.

There aren’t many Pittsburghers commissioning Seastedt’s buggy bakes. Instead, the entomophage (aka bug chef/eater) says she’s finding a place in educational settings.  “I feel like one of the most radical things people can do is self-sufficiency,” she says.

Eventually, that’s her goal. Seastedt hopes that Crickets to Betsy will be a resource for those interested in raising and cooking with edible bugs. She dreams of opening a symbiotic cricket farm and nonprofit that turns local produce into local protein. Until then, Seastedt plans to keep baking with bugs and educating the city on why telling people to “eat bugs” might not be an insult after all.