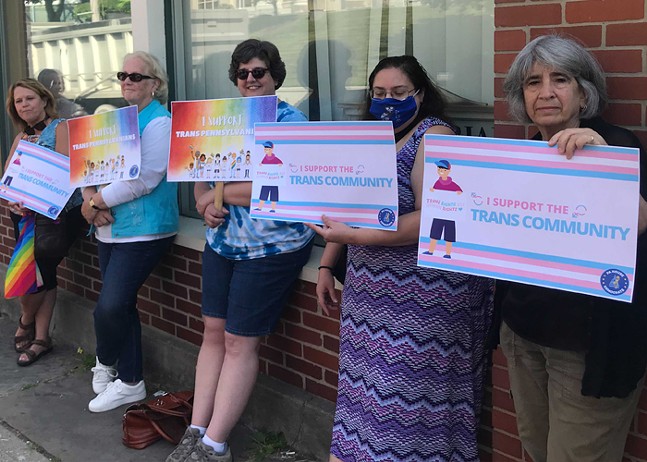 Magisterial District Judge Leah Williams Duncan today ordered no contact between an Observatory Hill family alleging transphobic harassment and Darian Balcom, the neighbor who is accused of harassing them. Judge Duncan will allow Balcom’s attorneys to submit a brief on their interpretation of the “fighting words doctrine,” which describes one kind of exception to the First Amendment, and then she will issue a final ruling within 90 days, she said in court.

Sean O’Donnell and his husband, Todd Collar, filed a criminal complaint against Balcom for harassment last month after she posted a large sign angled towards their trans daughter’s window that said, “‘Transing’ kids is abuse and homophobia.”

Before the hearing on June 22, a couple of dozen friends and community members stood outside the magistrate’s office holding supportive signs. Inside the waiting room, O’Donnell and Collar anxiously waited with their daughter Ke’Juan, 14, and son Chris, 16.

“This is one of the top five nerve-wracking experiences of my life,” O’Donnell tells Pittsburgh City Paper.

Ke’Juan, the teenage girl whose window faced the sign, says she is most concerned about making sure other families “with children like me” don’t have to go through something similar. “I’m not only thinking of myself in this process,” she says.

O’Donnell says Balcom should be punished to the fullest extent allowed by law, which he believes should include a fine and jail time, but he acknowledges that is an unlikely outcome. “She has shown no inclination to stop, it escalates further and further and becomes more and more pronounced. Our concern is ‘What’s the next thing?’”

In more than an hour of court proceedings, Balcom’s lawyer Ashley Rundell argued that the content of the sign in question is constitutionally protected speech and that it was an isolated incident, not indicative of a “course of behavior” as required by the state statute on harassment.

“It’s a very dangerous thing to suppress speech,” she said.

During the proceedings, O’Donnell read from Facebook posts Balcom allegedly made discussing two gay men in her neighborhood with four adoptive children, misgendering Ke’Juan by referring to their family as consisting of “six men.” These posts speculated that O’Donnell and Collar kidnapped their adoptive children and are forcing them to transition.

“It's hard not to read that as some sort of call to arms to come rescue these kids who these men are abusing,” O’Donnell said.

The Facebook posts were not admitted into evidence, however, because O’Donnell received the screenshots from another neighbor who was not present to testify that the screenshots are of Balcom’s page.

Although both Ke’Juan and Chris came to court prepared to testify, Rundell repeatedly suggested that their testimony was not relevant to the case because only O’Donnell’s name appeared on the complaint.

Judge Duncan determined that the children’s testimony was relevant.

“I am a proud Black trans girl,” Ke’Juan said in her testimony. “I feel attacked and horrified by what Darian Balcom has done to me and my family. … When Darian first misgendered me on purpose, I thought, ‘the audacity of this woman to say something like that.’ When I first saw the sign, it made me feel like she was going to do something against me and my family, urging [others] to ‘save’ me and my brothers. I thought, and still believe, that she is going to hurt us.”

Balcom declined to testify at the hearing or to offer comment for this story.

The most contentious question of the hearing was whether or not the language of Balcom’s sign, “‘Transing’ kids is abuse and homophobia,” is constitutionally protected speech.

“We’re not saying that Ms. Balcom doesn’t have the right to free speech,” O’Donnell said, “but we are saying she’s using that to harass us. She’s positioning the signs a certain way. She’s making sure we see it. She’s smiling when she sees that we’ve seen it. She takes it down within 48 hours because mission accomplished.”

Rundell argued that the sign is not one of the few exceptions to the First Amendment, such as “fighting words,” which the Supreme Court defined in 1942 as words that "by their very utterance, inflict injury or tend to incite an immediate breach of the peace.”

After Rundell offered that definition, Judge Duncan countered that if someone accused her of abusing her children, “I’d want to fight.”

O’Donnell agreed, arguing that “the only reason it didn’t incite” a breach of the peace is that he and his family advised the rest of the neighborhood not to engage with Balcom.

“I guess I should have reacted that day and done something and then we would have fallen under the law,” O’Donnell said.

O’Donnell also pointed out the gravity of Balcom’s language in the current political climate in which anti-LGBTQ individuals and groups continue to incite a moral panic with false claims of child abuse.

Rundell maintained that Balcom’s speech served a purpose other than to annoy or harass Ke’Juan and her family, which would make it protected speech.

“I believe that the sign contains fighting words,” Judge Duncan said at the conclusion of the hearing. “I want to get it right in terms of the protected speech and the fight speech. I think it’s enough [to qualify as harassment],” she said, offering Balcom’s lawyers a week to prepare a brief on their argument why the sign is not “fighting words” and invited O’Donnell to do the same if he wished. She said she would issue her final decision after reviewing those briefs and ordered no contact between the parties in the meantime.

Ciora Thomas, founder and executive director of Black trans-led nonprofit SisTers PGH, was also present at the hearing and has connected with the family. She tells CP she is hopeful about Judge Duncan’s eventual verdict.

“I’m glad the judge seemed to be a bit progressive,” she says, adding that she was happy to see a no-contact order issued.

“I feel like people see this stuff online but don’t realize it can happen in their neighborhood,” says Chris, one of Ke’Juan’s brothers.

O’Donnell says their family is grateful for the no-contact order and the overwhelming community support they have received. He says their family often discusses “how many [trans] kids don’t have support” like Ke’Juan does.