“It’s nice to have been in bands before and made a bunch of mistakes already.” 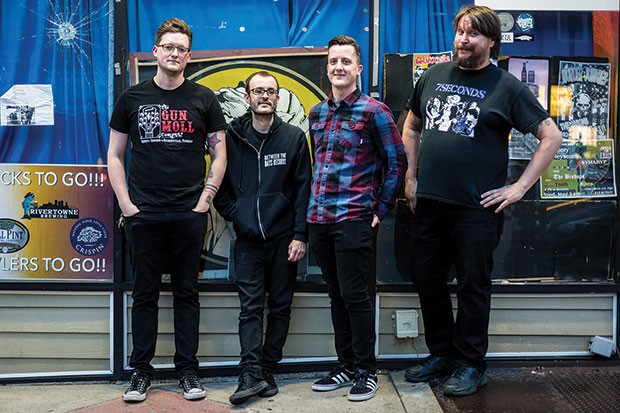 CP photo by Maranie Staab
Nightmarathons
The members of Nightmarathons are veterans of the scene. They’ve collectively played in at least 10 bands, and they aren’t afraid to point out they’re part of Generation X (with a laugh, of course).

But with plenty of gigs lined up, and a slot at Pre-Fest and FEST 16 in Florida this October, Nightmarathons has just begun. While some traditionalists would tell the band to hang it up and get “real” jobs so they can be “real” adults, the band doesn’t subscribe to that silly capitalist notion.

“There are no rules,” says band member Corey, laughing. “Not enough people realize that.”

For Corey, Stowe, Chris and Tim (they prefer first names only), their collective years of musical experience make communication at practice and during the writing process a piece of cake.

“It’s nice to have been in bands before and made a bunch of mistakes already. We’ve learned a lot,” says Stowe.

“It’s like when a divorced couple has broken up five times, but the final time they get together for good, it’s great because they’re not afraid to offend each other anymore, so they’re much more honest,” explains Chris. “That’s how we are, so the communication is great.”

Nightmarathons’ sound calls forth the earliest wave of emo music and the proto-pop punk of the late ’90s and early 2000s. It’s not like the Blink-182 wave of sound, but closer to the Piebald brand of pop punk that feels really triumphant while being technically interesting.

Evident on the latest EP, a four-track, self-titled work released earlier this month, is the honest, raw self-examination that makes emo and pop punk so relatable. There’s acknowledgement of flaws and a desperate desire to get your life together when everything feels like it’s falling apart.

“I have to write about those things,” says Stowe. “It’s the only way I ever feel normal, because writing about my problems is what helps me work through them.”

“I spent a lot of time not doing that, and it felt awful,” he adds. “I’m so glad to be back in a band and writing again.”