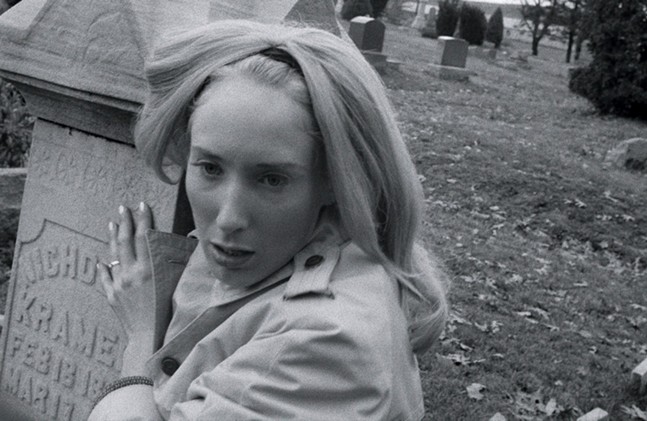 Janus Films
Night of the Living Dead
A movie about people being stuck in a house, surrounded by the infected might not seem like an ideal pandemic watch, but for horror fans, it might be just what the doctor ordered. That’s the idea behind a Night of the Living Dead screening tour coming to drive-ins across the country, including one near Pittsburgh.

From Fri., Aug. 28 to Sat., Aug. 29, the Riverside Drive-In Theatre in Vandergrift, Pa. will present George A. Romero’s locally-shot 1968 masterpiece as part of a double feature with another horror favorite, the 1981 splatter fest Evil Dead.

The screening is part of a nationwide tour organized by two film distribution companies, the Hollywood-based Grindhouse Releasing, described on its website as being “dedicated to the restoration and preservation of classic exploitation films,” and the more art-house focused Janus Films. As an added bonus, Janus supplied their 4K restoration of Night of the Living Dead for the tour.

As reported by the film news website, Bloody Disgusting, the screenings also come with an “all-new introduction” to Night of the Living Dead that covers Romero’s legacy. The new addition features Daniel Kraus, the co-author of Romero’s posthumously released new zombie novel The Living Dead.

The tour also highlights the recent focus on drive-in movie theaters, a beloved pastime that, over the past several decades, has seen a massive decline. In Pittsburgh and other cities, movie lovers have been flocking to drive-in movie theaters, where viewers are able to enjoy films in their respective vehicles, as an alternative to traditional theaters, which have struggled to continue operating while also complying with COVID-19 restrictions like requiring masks and social distancing.

Drive-ins have even tried making the movie-going experience safer by allowing customers to order concession food online ahead of time to prevent anyone from having to stand in line.

Because COVID-19 has also pushed back new film releases, Riverside Drive-In and others have been showing older family films, comedies, and cult classics. For example, Riverside recently presented a Patrick Swayze double feature of Road House and Dirty Dancing. From Aug. 21-23, Riverside will also screen two other horror classics, A Nightmare on Elm Street and Friday the 13th.