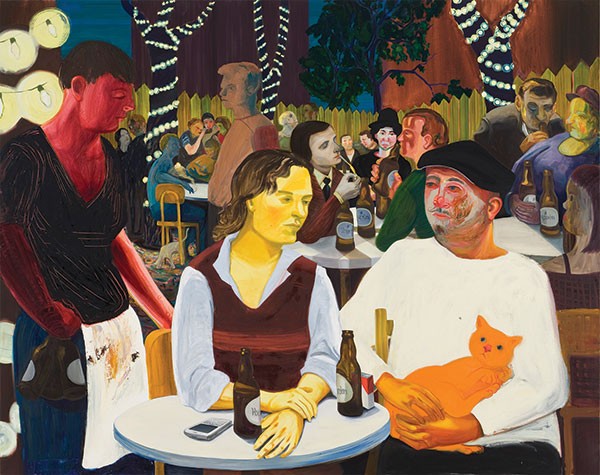 Nicole Eisenman's work is as advantageously sited as anything in the 2013 Carnegie International. Her paintings are exhibited to great effect and her sculptures work the Hall of Sculpture's mezzanine in a way that's fresh and funny. Awarded the Carnegie Prize by a host of Carnegie-ans past and present — museum director Lynn Zelevansky, two board members and five former Carnegie International curators, in case you're wondering — Eisenman walks off with $10,000, the Tiffany-designed Medal of Honor and a heap of glory.

Eisenman's paintings hold the space that's both intimate — on the mezzanine, you can only step back so far without risking your life — and expansive within the sweeping views of the magnificent hall. Her white plaster sculptures rhyme with the existing classical statuary as they utilize empty plinths that have been yearning to fulfill their destiny, and — along with her paintings — connect with art's endangered traditions, while thumbing her nose at them. She manages to have it both ways.

Eisenman, who was born in France and studied at the Rhode Island School of Design, lives and works in New York City. Painting is the basis of her considerable reputation. Beyond the sparking quality of her endless inventiveness, she's esteemed for giving narrative painting a breath of fresh lesbian and feminist themes (upfront in the earlier work, later less apparent) in the '90s, when Neo-expressionist machismo had exhausted itself.

If you had to plug her in somewhere, "Bad Painting" would be as good a place as any, not to be confused with painting that's just plain bad. "Bad Painting" isn't exactly a movement, but more of a category first staked out by curator Marcia Tucker in the late '70s. It's good painting that willfully disregards dominant styles and clichés of mastery, often drawing from antecedents such as Francis Picabia and kitsch. Because Eisenman arrived in the early '90s, she counts as a second gen-er, the student who outshone her sources.

Eisenman's got as fertile an imagination as anyone I can think of, and a real nice way with pigment. Try as it might, her "Beer Garden With Ulrike and Celeste" (2009) doesn't manage to conceal the skill that went into its making. Figures are piled up in space in an offbeat way, teetering between conventional perspective and the flatter pictorial space typical of outsider art (such as works by Joseph Yoakum, also in the International). Idiosyncratic characters are rendered in a range of styles from the somewhat accurate to the expressionistic to the puerile, yet it all hangs together while conveying the scene, including a scattering of bottles, cats and strings of lights. On the other hand, "Death and the Maiden" (2009) could be straight out of a thrift store or Dumpster, with its oh-so-serious theme and the (willful) ineptitude of sausage-like fingers and the maiden's mop of hair. But the telling detail is her pronounced tan lines, a flourish that wouldn't occur to a freshman or a Sunday painter.

The display of 19 paintings is a mini-retrospective spanning the years 1993 to 2011. You can trace a path chronologically, but stylistically it's a minefield. Certain tendencies come and go — the earlier paintings, for example, tend to be more crowded with human figures — but very different paintings date to the same year, and in places this could pass for a group show. Across the board, they're mostly cartoonish, more sketchy than belabored. But she's not beyond pointy-brush detail when she sees a reason for it, as in passages in the on-the-mark "Tea Party" (2011), a white-supremacist-prepper family portrait with a distraught Uncle Sam. There's a traditional side to her paintings, as well, from classical references such as Amazons to stagy compositions that orient the figures toward the viewer.

While the paintings often flirt with the abject, the seven sculptures dive right in. Mostly produced "in conversation with Sam Greenleaf Miller," Eisenman's sculptures are so clunky that I think for most viewers the word "ugly" would come to mind, though they emphatically assert their gracelessness. The lumpiness of such works as "Couple Kissing" (2013) gives them an innocuous and pathetic quality, like a worn stuffed animal, contrasting with the idealized, heroic classical statues on permanent display in the Hall of Sculpture. Eisenman's plaster sculptures are positioned in direct relationship to the classical plaster casts, interspersed between them or otherwise in dialogue with them. As with those casts, most of Eisenman's sculptures are placed to be best seen from across the open mezzanine, though Eisenman has added an element for close viewing, namely, a vaguely lunar landscape of dripped and broken plaster at the bases — a nod to the messiness of art-making and by implication, I think, of life.