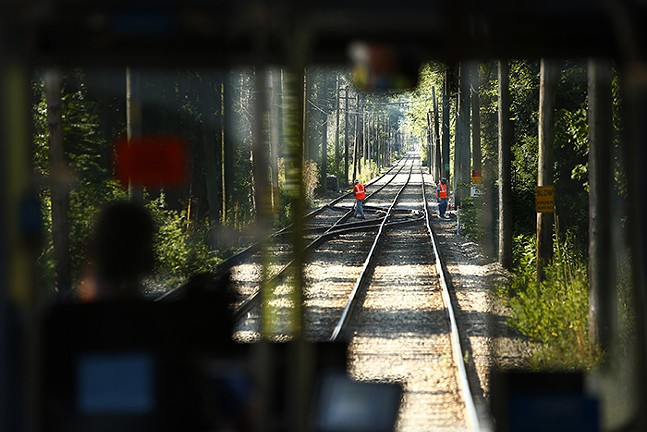 The biggest proposals include increasing services to and from Pittsburgh International Airport and extending the light rail system north from Pittsburgh’s North Shore.

Given the recent growth of boroughs and suburbs north of the city, Port Authority has proposed a “high-capacity corridor” that will potentially extend out to Cranberry and will include a hub in Ross. This would include a potential light rail extension would stretch through Manchester to Emsworth along the Ohio River on one section and then through the central North Side en route to Ross.

Port Authority is also exploring the possibility of providing a high-capacity corridor running along the south side of the Allegheny River, through the Strip District and Lawreceville, and up to Verona and Oakmont and eventually New Kensington.

During public meetings, Port Authority planning director Amy Silberman noted the many requests and suggestions for greater accessibility to the airport, according to the Pittsburgh Post-Gazette. To accomplish this, the authority suggested that bus service could be increased through the West Busway and then follow the Parkway West out to the airport. In the past, Allegheny County Executive Rich Fitzgerald has offered that bus-only lanes could be added to the shoulders of the Parkway West. A West Busway extension from Carnegie to Bridgeville was also proposed.

Other possible service expansions include reinstating Red Line light-rail service through Allentown and other hilltop neighborhoods. An extension of the East Busway and additional bus-only lanes could provide high-capacity service through East Pittsburgh from Swissvale, as well as another spur to connect Monroeville to Swissvale and the East Busway system.

One service retraction area could be Blue Line light-rail service to Library. Silberman said the last section of the Blue Line has seen very limited ridership as of late.

However, none of these proposals are set in stone. “It’s a long-range plan, so it will take time to get there,” Port Authority CEO Katharine Kelleman told the Post-Gazette. “Dream big. Let’s talk about the wonderful system we deserve.”

Before NEXTransit can begin to take shape, Port Authority needs to hear from citizens who use public transit to ensure proper ridership and that the plan meets community needs. Interested parties can provide input at NEXTransit's website.

The proposed changes will be adapted and adjusted based on the responses NEXTransit receives in the coming months. Also, not all the changes and proposed projects will begin at once. Instead, they will be stretched out over the 25 year period with additional changes made throughout the project.

Along with the development of new routes through NEXTransit, public transit activists anticipate a long-awaited change in Port Authority’s fare system.

In 2019, Port Authority entered into a three-year contract with California-based consulting firm Four Nine Technologies. Four Nine’s CEO told the Port Authority’s board the firm expects to present a report on the fare system soon.

Transportation advocates at Pittsburghers for Public Transit hope this new report will include a “fair fare” system that will be targeted at assisting low-income riders who often cannot afford prepaid ConnectCards.

“Fares must not be a barrier to access to public transit, so policies must be enacted to eliminate any barriers due to cost, convoluted cost structures, inaccessible fare payment systems, and hostile or overly punitive fare enforcement policies,” reads the Pittsburghers for Public Transit website.

Port Authority did allow for free bus rides during a portion of the pandemic, but re-instituted full fares when front-door boarding for buses resumed. The authority's most recent change to the fare system occurred in January 2017, when it switched from a two-tiered fare based on trip lengths to a flat rate of $2.50 for those using ConnectCards or $2.75 for riders paying with cash. Transfers cost $1 and can only be accessed with ConnectCards.

According to the Post-Gazette, providing free transfers  would have resulted in about $5 million in lost revenue and free fares for low-income riders would cost Port Authority $4-8 million. The authority is due for a windfall of federal funding soon, thanks to the recent passage of the COVID stimulus bill.

For Pittsburghers For Public Transit, this was a step in the right direction, but they hope to see additional reforms in the coming months as Port Authority receives new information about their ability to implement such reforms.