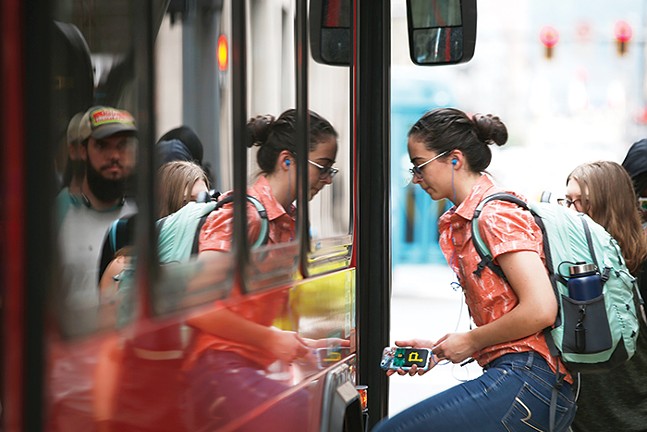 Getting around Pittsburgh can be intimidating for anybody, but for transplants, it can be a bewildering, anxiety-laden endeavor. Many streets have small road signs or none at all, and some intersections resemble deformed starfish instead of typical four-way stops with traffic signals. The hills don’t make anything easier.

The confusion can lead newcomers to avoid venturing beyond their local neighborhoods. But Pittsburgh City Paper wants our new residents to explore our wonderful city, with its scores of distinct neighborhoods, lively public parks, and cultural institutions. To take in all these attractions, CP offers this handy guide of different ways to get around Pittsburgh, including some well-worn tips and lesser-known shortcuts.

If you are a student at University of Pittsburgh, Carnegie Mellon University, or Chatham University, and you aren’t taking the bus or the T (what we call our light-rail system), you’re throwing money down the drain. Students and faculty at those universities can tap their school IDs aboard buses, light-rail cars, and the incline for free rides. Students at Carlow University, Point Park University, and Robert Morris University can ride for $1 after 7 p.m. on weekdays and all day on weekends, as long as they present their IDs and pay in cash.

To ride the bus, wait at a designated stop (look for a small blue sign). If there are cars parked near your stop or you are waiting in a shelter, it’s wise to step out to the curb as your bus arrives, so the driver can see you. Track the progress of your route using the Transit App (live-tracking routes are indicated by flashing lines next to the bus route number).

The app allows users to enter destinations or save favorite routes so it’s easy to spot when your bus is on its way. Remember to make sure which direction the bus is heading, inbound or outbound. Most routes travel to Downtown and back out. Toward Downtown is "inbound," out of Downtown is "outbound." For routes that don’t travel Downtown, like the 54 and 64, inbound routes travel north, and outbound routes travel south.

When your bus arrives, enter through the front door and pay by tapping your student ID or ConnectCard (visit www.connectcard.org to find where to purchase a ConnectCard), or pay cash. It’s $2.50 for a one-way trip using a ConnectCard and $2.75 if you’re paying in cash. Transfers are $1 and can only be used with a ConnectCard. When your stop is near, pull the cord near the windows or hit the small red button near a rear exit to request a stop. Exit through any door.

Riding the light rail around Downtown or to the North Side is free. If you continue riding across the Monongahela River and into the South Hills, you have to pay ($2.50 using ConnectCard or $2.75 cash) at the front of the car. Currently, riders from the South Hills heading inbound pay as they enter, and outbound riders pay as they exit. At "low-level" stations, riders pay in the car; others have station agents outside the car to take your ticket. After the station agents go home, everyone pays in the car. It sounds complicated, but you'll get acclimated quicker than you think.

More information about Pittsburgh’s public transit can be found at www.portauthority.org. 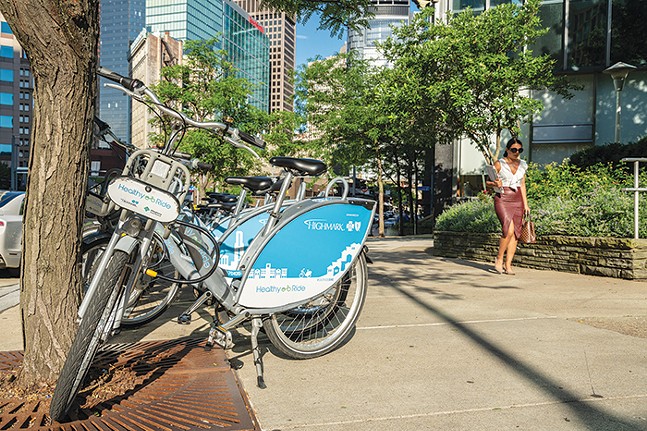 Pittsburgh has been beefing up its bike infrastructure, and as a result, the network is getting safer and more convenient with more protected bike lanes. When cycling, remember to follow Pennsylvania state driving rules and learn to use your hand signals when turning and stopping. It’s recommended that you ride in bike lanes and in the right-hand section of roads, but this is NOT a requirement. Anytime cyclists feel the need (especially if they feel unsafe on the road), they are entitled to take the entire driving lane.

Local bike-advocacy organization Bike Pittsburgh recently updated its Biking 101 guide with expert tips; you can pick up a guide for free from your local public library or at the Bike Pittsburgh offices in Lawrenceville. Bike Pittsburgh also has a list of how-to videos available at bikepgh.org. The website has a map of the city that provides all the best and safest cycling routes; paper copies of the map are widely available at bike stores.

If you don’t own a bike, Healthy Ride has you covered. The bike-share company has more than 100 stations located throughout the city and most are in neighborhoods familiar to newcomers (Downtown, Oakland, Lawrenceville, East Liberty, and the Strip District); a station map and instructions on how to ride are available at healthyridepgh.com.

Healthy Ride costs $2 for 30 minutes, and bikes can now be returned to any station, regardless of whether docks are available (just insert the bike lock into the front-wheel base and hit the “OK” button on the bike’s keypad). Free 15 minute rides are available to users who tap their Port Authority ConnectCard (register the card as a kiosk or Healthy Ride office). Membership costs $12 a month and includes unlimited 30-minute rides.

If you want to drive, CP advises studying the route before heading out. Driving in Pittsburgh is filled with insufficiently marked intersections and weird rules. Stay alert for Pittsburgh’s many one-way streets and turn-only lanes. There are also some bus-only lanes, like on Fifth Avenue in Oakland and Smithfield Street Downtown, so keep an eye out. Drive the speed limit, respect cyclists on the road, and watch for pedestrians — there are a lot of pedestrians in Pittsburgh, particularly in the city.

Beware of the infamous “Pittsburgh Left.” The practice — in which a driver going straight will allow a left-turning driver on the other side of the intersection to go first at a green light — is becoming less fashionable, but it still occurs. Pittsburgh freeway onramps are also notoriously short and Pittsburghers aren’t great at merging. Keep your head up, but expect people merging just to come to a complete stop before entering the lane. Merge points on the Fort Pitt and Fort Duquesne Bridges in Downtown are pretty hectic. Slow down and be courteous.

If we all realize that we have places to be and different methods to get there, our respective journeys will be less stressful and safer.

Pittsburgh is a walking town. According to U.S. Census figures, about 11 percent of residents commute via two feet, one of the highest percentages in the country. Ironically, however, the neighborhoods with high percentages of pedestrians, like Oakland and the South Side, don’t always feel safe for walkers. CP advises walkers to always look both ways, even when given a walk signal, and keep your eyes on cars as much as you can.

Intersections on Fifth Avenue in Oakland should be crossed with caution since there’s a counter-flow, bus-only lane, and speeding among drivers is common. This also holds true for intersections on Baum Boulevard in Bloomfield, and Boulevard of the Allies, Downtown.

Regardless, CP also wants to empower newcomers to walk. Walking is an effective way to get around Pittsburgh, since the city is relatively compact, and driving or taking public transit can sometimes be confusing. Also, the Mayo Clinic in Minnesota says regular, brisk walking comes with many health benefits, including prevention of heart disease and high blood pressure, as well as strengthening muscles and improving your mood.

And if you live in Oakland, South Side, the Strip District, Downtown, or the North Side, CP suggests taking the trails. There is a convenient trail from Oakland to the South Side, a trail connecting South Side to Downtown, and trails that stretch from Downtown to the North Side, the Strip District, and even the neighboring suburb of Millvale. Visit riverlifepgh.org for a helpful guide to the trails.

Since we live in a time of smartphone ubiquity, many are aware of how to use ride-hailing apps, which are pretty self-explanatory. Both Uber and Lyft service Pittsburgh, and apps can be downloaded from each company’s website.

Pittsburgh also has a local taxi-run, ride-hailing app called zTrip. This service allows riders to request a ride in the moment or book ahead, and riders have the option to pay with cash or a credit card. Drivers at zTrip are also required to pass background checks, and rides never have surge pricing. The app can be downloaded at ztrip.com. Promo codes are available on each ride-hailing company’s website. 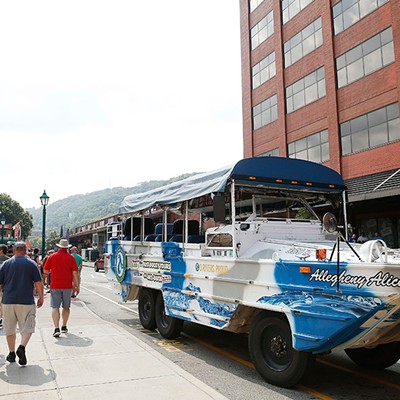 The Newcomers Guide to Bloomfield-Garfield

The Newcomers Guide to Oakland

The Newcomers Guide to South Side

The Newcomers Guide to Squirrel Hill

The Newcomers Guide to the Strip District

The Newcomers Guide to North Side

The Newcomers Guide to Downtown Pittsburgh

The Newcomers Guide to East Liberty

The Newcomers Guide to Lawrenceville

The Newcomers Guide to Shadyside