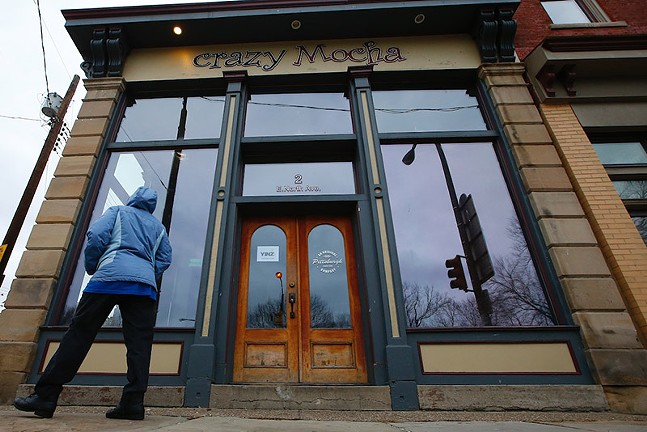 CP photo: Jared Wickerham
The site of the new Yinz Coffee in Pittsburgh's North Side
Coffee is coming back to Federal Street in the North Side. After long-standing, local coffee chain Crazy Mocha filed for bankruptcy late last year, the chain’s location on Federal Street closed down. It had been one of just a handful of Crazy Mochas to actually remain open through the pandemic.

According to the Pittsburgh Business Times, Zeff has a deal to open his new Yinz Coffee location in the building on the corner of Federal Street and North Avenue, and he plans to do so in March. Zeff also indicated a desire to open three to four locations in the next several months.

"I’ve been out of the industry for almost three years now," said Zeff, observing that Starbucks and Dunkin' continue to be strong in the region. "I think there's just room out there if you have a good product."

Zeff, who admitted years ago in a story to not actually drinking coffee, says he believes the coffee brand is strong in Pittsburgh. And even though he doesn’t drink coffee, he did grow Crazy Mocha into more than 30 different locations at one time before selling the chain.

His return could be celebrated by former Crazy Mocha fans and staff, who were perplexed that the chain didn’t reopen most of its stores during the pandemic, even as other chains like Starbucks and Dunkin' did good business once coffee shops were allowed to operate again, even with restrictions.

Yinz Coffee will source its coffee from Baldwin borough-based 19 Coffee Co. roaster. According to the Business Times, the North Side store also has plans to include a small market offering various local products, as well as products for FancyPants Popcorn, which Zeff also owns.