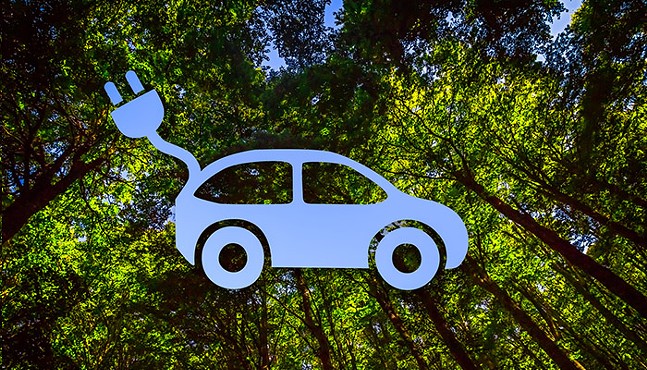 Transportation made up 24% of greenhouse gas emissions in Pennsylvania in 2017. Most of those were produced by light-duty vehicles such as cars, vans, SUVs, and pickup trucks. Continuing the same usage trends may make it difficult for Pennsylvania to reach its greenhouse gas reduction goals by 2050, but a new study shows that joining a zero-emissions vehicle program could help the state meet its climate goals.

The PennEnvironment Research and Policy Center and the Frontier Group released a new study on Thu., May 6, showing that joining a ZEV program could result in 75% lower carbon dioxide emissions from cars and trucks from 2020’s levels by 2050, which would also decrease the presence of air pollutants such as nitrogen oxides and sulfur dioxide, both of which can cause lung disease.

“We have to be diligent, and we have to make sure that our voices are heard and that our advocacy is taken seriously when it talks about the pollution and the environment,” says State Rep. Darisha Parker (D-Philadelphia).

Parker also has asthma, which, according to the CDC, can be triggered by environmental factors such as air pollution. The 2019 Allegheny County Health Department Asthma Task Force Report found that Black children require hospitalization or emergency department visits at more than seven times the rate of their white peers, which the report in part links to environmental factors such as poor air quality.

In February, Gov. Tom Wolf requested that the Department of Environmental Protection begin drafting legislation to make ZEVs more readily available to consumers. If Pennsylvania adopted a ZEV program, it would join 13 states in setting minimum requirements for the number of ZEVs sold. While both battery electric vehicles and hydrogen fuel cell vehicles are forms of ZEVs, the report focused on electric vehicles on the sales and charging infrastructure for electric vehicles.

The report notes that electric vehicles have also improved in the past decade in both affordability and the distance they can travel per charge. According to the report, electric vehicle models sold in 2020 travel about three times as far on a charge as those sold in 2011, and the price of electric vehicle batteries also declined by 89% in the 2010s.

Electric vehicles still require power to run, and Duquesne Light, which delivers electricity to Beaver and Allegheny counties, views the potential pivot towards electric vehicles as an opportunity for customers.

“When we say we're trying to make and ensure that all could experience the benefits of electric mobility, we really mean it,” says Duquesne Light transportation electrification manager Sarah Olexsak. “We want to see more electric school buses, transit buses, electric bikes, and scooters on the road. Through all of our programs, we’re making a concerted effort to target underserved areas in our community, such as those designated as environmental justice areas.”

While the report did not mention specific policies to ensure that the manufacturing of ZEVs would also be environmentally friendly, it did note that emissions reductions will be even greater if those vehicles are powered with 100% clean and renewable electricity.

The report also did not include explicit policy recommendations for ensuring 100% clean and renewable energy, although it did provide several complementary policy suggestions to ease the financial strain of switching to ZEVs from internal combustion engines, including rebates for ZEV purchases, expanded charging infrastructure, and collaborating with utilities to ensure optimization of electrical grids. It also encourages collaborations with neighboring states to reduce transportation emissions together.

“We know that air pollution and climate pollution doesn't stay within state borders,” says PennEnvironment field director Flora Cardoni. “Ultimately, we owe it to our children and to future generations of Pennsylvanians to take the steps necessary today to address climate change.”