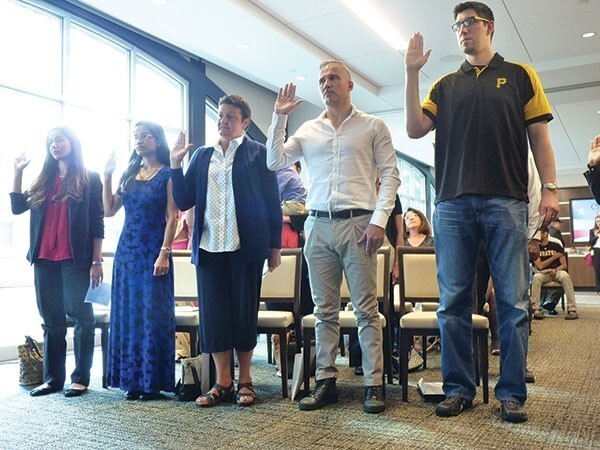 CP photo: Ryan Deto
New American citizens being sworn in at PNC Park in 2016.
A recent study shows that if Pennsylvania’s undocumented immigrants received citizenship, the state budget would benefit from tens of millions of new dollars.

The progressive think tank Keystone Research Center released a study in May titled “The Economic Contributions of Pennsylvania’s Immigrants.” The study was written by Muhammed Maisum Murtaza and it quantifies the economic roles of both naturalized and undocumented immigrants in Pennsylvania and relays the fiscal benefits of authorizing non-citizens.

The study says there are 94,000 employed undocumented immigrants in Pennsylvania. Keystone Research Center analyzed data from a 2017 study conducted by the Institute of Taxation and Economic Policy, which found that undocumented immigrants contributed to nearly $135 million in state and local taxes. If they were authorized citizens in Pennsylvania, their paid taxes would have been estimated to increase by $51 million due to better opportunities in higher paying jobs and filing for tax returns.

“Immigration-friendly policies aren’t just a matter of economic justice — they would enhance and expand the contributions that immigrants make to the Pennsylvania economy, which would benefit everyone,” the study says.

President Joe Biden has sent a bill to Congress, asking them to modernize the U.S. immigration system, but efforts have stalled. Biden’s legislation would create an eight-year pathway towards authorizing citizenship to the estimated 10.5 million undocumented immigrants in the U.S., as well as other immigration policies. A large majority of Americans support a path to citizenship for undocumented immigrants.

Within the first sector of labor force contributions, the study reveals that 9% of frontline workers in Pennsylvania are foreign-born. The study also shows foreign-born contributions in other labor forces, such as 9% that are a part of the trucking/warehouse industry and 19% in the building cleaning workforce. In the last 30 years, the number of work-eligible immigrants has increased from 53% in 1990 to 67% in 2019, equating to 850,000 individuals.

Pennsylvania houses almost 900,000 individuals with immigrant backgrounds, equating to 7% of the state’s population. Of that, the study says that 160,000 are undocumented. The pro-immigration business group New American Economy says Pittsburgh is home to about 88,000 immigrant residents. Within that number, 78% are considered in the working-age.

The Keystone Research study also discusses economic and tax-based contributions and focuses on household income and spending patterns of immigrants in Pennsylvania. The study says “immigrants in Pennsylvania have a total spending power of nearly $25 billion and a total household income of $35 billion.” The study adds that in 2019, foreign-born residents paid nearly $10 billion in state and local and federal taxes.

In the Pittsburgh region alone, the New American Economy says that immigrants paid $1.2 billion in taxes with a household income of $3.8 billion, and hold a spending power of $2.7 billion.