Even as many Pennsylvania school districts struggled to tame rising pension costs and deal with stagnant tax revenues, the state also saddled them with shouldering the rising cost of educating students living with disabilities — without giving them the financial assistance to handle it, a new report concludes.

The state’s 501 school districts boosted their special education spending by $2 billion between 2009 to 2019, but state aid during that same period grew by just $110 million, the report by the Education Law Center and PA Schools Work, concludes, citing the most recent state data.

According to the report, out of new dollars spent on special education over the last decade, school districts have provided 92 cents of that total, the analysis found.

“Pennsylvania has been a bottom-dweller nationally for what a low share of overall public education spending the state provides – just 38 percent,” Education Law Center Executive Director Deborah Gordon Klehr said in a statement. “For special education, the portion covered by the state is now only 22 percent, down from 32 percent a decade ago. When the state abdicates responsibility like this, students are harmed, especially in our lowest-wealth school districts that have the greatest difficulty generating more revenue to meet student needs.” 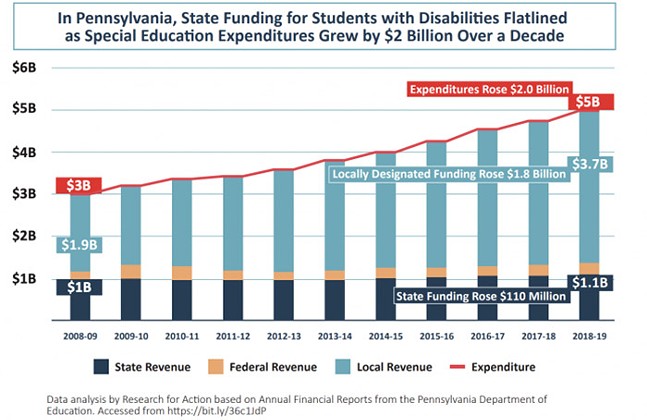 The recently approved state budget includes more than $1.1 billion in funding for special education programs. Because of the pandemic, the line item is funded at the same level as it was in the 2019-20 fiscal year.

Advocates have complained for years that the state is underfunding special education, and have called on the state to update its funding formula to provide a more level playing field for students with special needs.

In 2019, a joint analysis by the Education Law Center and Research for Action, a policy research group in Philadelphia, concluded that the formula “does not accurately account for district poverty. As a result, state special education funding does not fulfill its intended purpose of addressing funding disparities resulting from differences in local wealth.”

Analysts argued that the state needed annual funding increase of $100 million a year or more to keep pace with rising costs.

A state commission tasked with studying the issue spent the autumn of 2019 traveling the state, taking testimony, so that it could return recommendations to lawmakers, the Capital-Star’s Elizabeth Hardison reported at the time.

The report found that:


As a result, over the course of a decade, the state’s share of funding has been dropping by 1 percentage point a year, the analysis found.