ORIGINAL STORY, April 29:
With many outdated water systems located throughout the country, many with varying levels of transparency, it's often difficult to know exactly what’s in the water that flows out of our faucets.

On April 20, locally based environmental group Women for a Healthy Environment released its “Something’s in the Water” report to help shed light on Allegheny County water systems, especially those outside of Pittsburgh Water and Sewer Authority, which covers the city of Pittsburgh and some bordering municipalities. The report focused on the potential for lead exposure depending on location and demographics. In response to pending revisions to the EPA Lead and Copper Rule, the report also makes recommendations to improve transparency and protect community health. PWSA has been replacing its lead water lines at a rapid pace of the years, and expects all lead lines in its system to be replaced by 2026.

“We heard a lot from consumers all over the county, who may not even be serviced by PWSA, you know [say] 'I'm worried about my water, do I have reason to be concerned,'” says WHE health policy coordinator Talor Musil. “So we were really trying to create a resource for consumers to be able to find information about their own drinking water.”

The report studied Allegheny County’s 36 water systems. Only 28 responded in full to WHE’s Right-To-Know requests, with additional five replying but failing to submit complete documentation. With the information from the responses, along with publicly available data, WHE found that 80% of water systems reported detectable levels of lead in their drinking water.

WHE’s report also summarized national data on privatization, which found that bills from privatized water systems are 59% more expensive and often have fewer systems in place for public input and oversight.

“Under this kind of management, community water systems are controlled by investors, who are experts in producing profits not in healthy and affordable drinking water,” the report says. 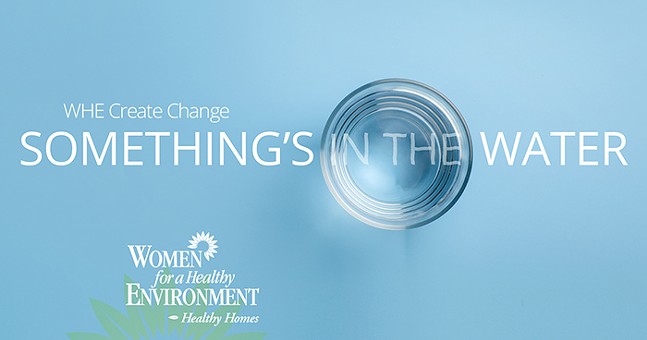 Women for a Healthy Environment released its "Something's in the Water" report April 20, 2021.
The report notes also notes that funding for public water systems has decreased 77% since 1970,  and says this can reduce public systems' ability to function and serve communities. It recommends regionalization and significant public funding to ensure safer drinking water.

Lead exposure is particularly harmful to children and can cause developmental delays, hearing loss, and seizures. It also accumulates in the body over time and can cause high blood pressure, difficult with memory, mood disorders, and fertility problems.

Currently, the EPA’s Lead and Copper Rule states that water systems must take additional actions to control corrosion when lead is present at least 15 parts per billion in customer taps. In Allegheny County, 2.9% of water systems are at 15 ppb or higher. Last year, however, revisions were proposed that 10 ppb become the new trigger level for required action, in which case an additional 14.3% of Allegheny County water systems would require action.

“This is something that is an ongoing issue with aging infrastructure, such as we have all across the northeastern part of our country, and certainly Pittsburgh is not alone in that effort,” says WHE executive director Michelle Naccarati-Chapkis. “So we know that lead service line replacement is a key critical component of reducing the amount of lead in drinking water. And then we have to think about other sources as well.”

Lead in water pipes has gotten national attention recently. In his Joint Address to Congress on April 28, President Joe Biden called on Congress to support his plan to replace all of the country's lead pipes.

The WHE report also shows the extent to which public and private water systems have replaced lead service lines. PWSA, which exceeded the 15 ppb trigger level in 2016, began lead service line replacements in 2017 on the public side of lead service lines, which can result in higher levels of lead exposure due to agitation of the pipes.

The report also includes guidance for community members if they are interested in finding the most recent water quality monitoring results for their water system or in requesting a water quality test on their drinking water. It also lists several actionable steps, such as attending water system board meetings and submitting grievance reports to one’s water system.

“Ultimately, water is not a commodity, it is a right,” the report says. “Public control of water is critical to a healthy democracy and a healthy community.”