Reviews of records by Aubree Nicole and Sour Wine Cult 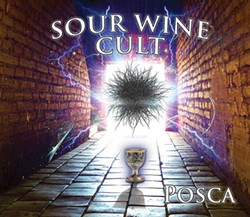 It’s tempting at first to make shallow comparisons between Aubree Nicole and Adele: They both have “A” names and were born in the U.K. Nicole, however, moved to Pittsburgh to pursue a career as a pop singer (move over, Los Angeles!). And on this five-song debut EP, Nicole shows that she is no Adele knockoff: On the track “So Fly,” in particular, she takes more inspiration from Beyoncé. Nicole has a smoky voice that sounds more mature than her 21 years, and her slinky and modern R&B beats are a consistent highlight. Though Diary of Aubree feels a bit unfinished (several songs just seem to fade out without a proper conclusion) and has some dated-sounding production choices, it’s clear that this is the work of a young singer with a lot of aspiration and drive.

Remember when Scott Weiland died back in November, and people started thinking about Stone Temple Pilots again? I don’t think the members of Sour Wine Cult ever stopped thinking about Stone Temple Pilots. (This actually makes sense: Sour Wine Cult formed during STP’s heyday, in 1993, then broke up, then reformed two decades later.) Posca sounds like an artifact from a certain time and place, namely a stereo tuned to a modern-rock radio station sometime in the ’90s. It’s hard to believe that this record came out this year, because it’s such a dead ringer for post-grunge bands like Seven Mary Three, Candlebox or Collective Soul — though Sour Wine Cult thankfully lacks the pomposity and pretentiousness of many of those bands.