Reviews of records by Them Labs and Jeff Burgess

By Troy Michael and Margaret Welsh

Them Labs is the brainchild of singer/guitarist Seth Pfannenschmidt (an occasional City Paper contributor) and drummer Joe Perkins, who started as a duo back in 2011. They released a self-titled debut shortly after and since then, Them Labs has expanded to a quartet with the addition of Tommy Patrick (bass) and Paloma Wu (violin). With a full band, Them Labs returns with the aptly titled album More Growl. Led by spunky yet stripped-down folk sounds, the dozen tracks on the release are toe-tapping fun. At times the band sounds like it is playing an Irish pub and is ready to belly up to the bar with you for a cold one (“Drink My Eyes Shut”). It also has the ability to scale the sound back, like on the morose “It Takes a Time Machine to Cry.” No matter if it is are two-stepping or lollygagging, Them Labs plays with conviction. Troy Michael 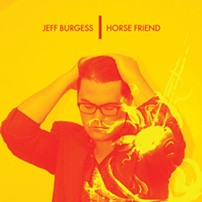 Speedily flipping from anthemic X-ish punk (“Bugs!”) to Birthday Party-style goth punk (“You Beautiful Creatures”) to what I’ll call “Billy Joel-esque piano punk,” (“P.S.”) Jeff Burgess is a musical chameleon, and a pretty talented one at that: Seriously, his ability to sound like Nick Cave is kind of stunning. This record, which was written and recorded entirely by Burgess in his bedroom, is odd and disjointed and scattered. The actual songwriting here is hit-or-miss and some tracks feel only partially fleshed out. But the whole thing is overflowing with fun and energy and a pure, raw confidence that makes it hard to dislike. Margaret Welsh