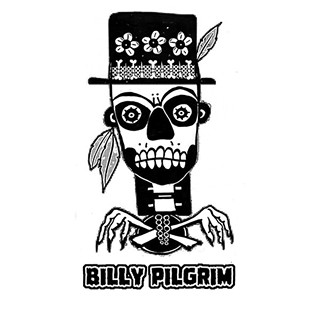 Billy Pilgrim — longtime local artist of many names, and former vocalist for MegaDef — brings an unconventional sound on this eight-track hip-hop release, with often-minimal backing tracks and naturalistic instrumentation.

What might be most striking on Big Empty Things is the acoustic-percussion sounds that underlie many of the tracks; in a world currently dominated by big, synthesized drum beats, Pilgrim goes small on several tracks, with bongos and gamelan-sounding percussion. The effect is to shift focus to his flow, often resting right between rap and slam poetry. That's not to say the whole album skews intellectual at the expense of fun or swagger, though: Pilgrim splits time between introspective and brash (as on "So It Goes," which literally switches modes back and forth throughout).

High points include the De La-sounding "The Hoek," with its rapidfire rhymes and allusions (all over the place, from Craig Mack to Pete Sampras), over a bassy track and record-scratching effects.

At times, it's the very cohesiveness of most of the tracks that makes others feel a bit out of place. "Melancholy Molly" is a great, understated R&B song, with its acoustic drums and organ; it just feels smoother than anything else on the album.

Ultimately, though, Pilgrim brings a set of tracks that showcase his diverse talents and clever lyricism, and mostly gel as a concept. Nicely done.