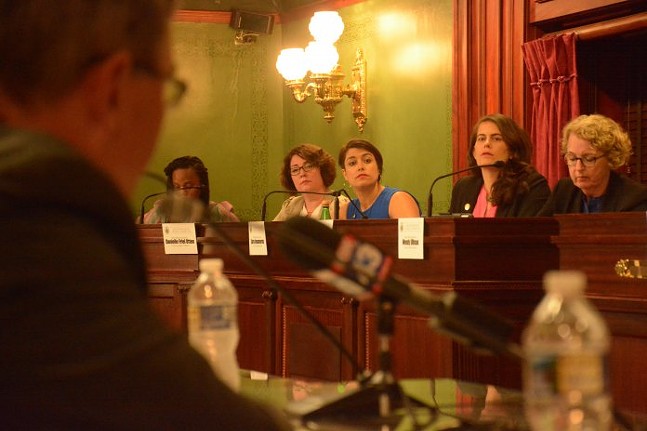 Pennsylvania Capital-Star photo by Stephen Caruso
From left to right: Rep. Danielle Friel Otten, Rep. Sara Innamorato, and Rep. Elizabeth Fiedler listen in during a hearing on Restore PA on Mon. June 10, 2019.
Progressives will have a new and official voice in Harrisburg for the next two years.

Fiedler, a second-term lawmaker who was endorsed by the Democratic Socialists of America, will chair the subcommittee.

“I think it’s clear that many of the policies that are roughly defined as ‘progressive’ are things that a growing majority of our caucus wants and certainly a majority of people across Pennsylvania,” Fiedler said.

The committee’s members are not yet finalized, Fiedler added, but she planned to take a collaborative approach to its work.

On Jan. 12, state Rep. Sara Innamorato (D-Larwenceville) congratulated Fiedler on her chair position and tweeted that she was "looking forward to working [with] her to promote new ideas and new voices."


Congrats to @RepFiedler, a fierce advocate for recognizing housing as a human right through policies such as a tenant right to counsel and an eviction moratorium during the pandemic. Looking forward to working w/her to promote new ideas and new voices. https://t.co/0cxgvQfaJy

The progressive panel will be part of the House Democratic Policy Committee, which, pre-COVID, traveled the state and held hearings on issues affecting Pennsylvania.

All four caucuses — House and Senate Republicans and Democrats — have a policy committee.

These committees message for each party while bringing lawmakers all over the state, from a hearing on liquor law at the Yuengling factory in Pottsville to a meeting on toxins in schools in Philadelphia.

When in the majority, these committees tend to preview the ideas that will be drafted into bills and, maybe, even make it into law.

But in the minority, the committees serve as a way to shine a spotlight on issues that may never see the light of day — that is, unless a chamber flips.

Right now, both the House and Senate are controlled by Republicans. Fiedler acknowledged the political constraints that come with working as junior partners in governing.

But, she argued, the new committee would give progressives a chance to flesh out policies that advance their priorities, such as expanding access to health care and housing or looking into a more equal tax code.

Pennsylvania cannot tax people at different rates under the state’s 1968 constitution, making progressive taxation difficult. Some, like Fiedler, also see it as a barrier to the state’s finances.

“If we had a better tax system in the state of Pennsylvania, a progressive tax system, one that actually taxes for working-class and middle-class people at a lower rate, and only calls on very, very rich people and corporations to pay their fair share, then we could really go ahead and do a lot of these exciting things that people want to see in Pennsylvania,” Fiedler said.

Even with the committee, Fiedler did not rule out the chamber’s progressives banding together in a more informal setting, akin to the Congressional Progressive Caucus, led by U.S. Rep. Pramila Jayapal (D-Wash.).

Combined with two retirements, three positions in the Democrats’ upper ranks were open. In internal elections, the caucus elected a fresh slate, only returning two of seven to their old position.

Among the changes was the election of Rep. Joanna McClinton (D-Philadelphia) as the first Black woman to lead the caucus, and the second woman in the General Assembly’s history.

Bizzarro is also among those new to leadership. He beat Rep. Mike Sturla (D-Lancaster) to earn the gig.

Within his new office, Bizzarro said he hoped to help his Democratic colleagues draft clear, error-free legislation that is ready to go when a rare opportunity for bipartisanship reveals itself.

“We’re not going to give any additional reasons [for] why Republicans don’t want to run our bills,” Bizzarro said.
Stephen Caruso is a reporter with the Pennsylvania Capital-Star where this story first appeared.