“Maybe no one has ever seen a group of 20 people in hijabs or Muslim attire at a Pirate game with 20 American friends.” 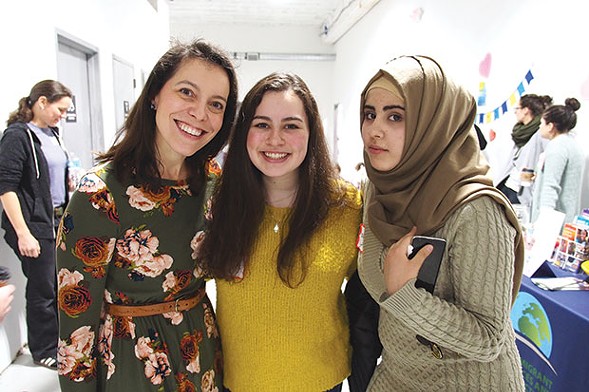 The lives of refugees and immigrants in Pittsburgh are little understood by most Pittsburgh natives, probably due in part to the small number of foreign-born residents living in the region.

According to 2015 U.S. Census figures, of the country’s 50 largest metro areas, the Pittsburgh region has the smallest proportion of foreign-born residents, at 3.6 percent.

But even with such a small foreign-born population, Pittsburgh isn’t immune to xenophobia and anxieties about immigrants and refugees, thanks in part to the rhetoric of President Donald Trump. In the days following Trump’s Election Day victory, immigrants and refugees faced verbal and physical attacks from many Trump supporters. Pittsburgh City Paper reported back in November 2016 that Abdulkadir Chirambo, a Somali refugee and head of the United Somali Bantu of Greater Pittsburgh, said his son was bullied by other youth in Beechview two days after the election. They allegedly told Chirambo’s son, “You are going back to your country; Trump is gonna put you in the garbage.” Chirambo and his son are U.S. citizens.

In response to these kinds of incidents, one Pittsburgher knew something positive needed to be done. Sloane Davidson, of Highland Park, is creating a mentorship program that will pair immigrants and refugees with native-born Pittsburghers — sort of like a Big Brothers, Big Sisters program between native-born and foreign-born residents.

Participants will spend at least six months together, and Davidson hopes to start with 10 to 30 families and individual pairs. Called Hello Neighbor, the program is a wink at perhaps Pittsburgh’s most famous compassionate son, Fred Rogers.

“It’s a good reminder that we are the town that brought Fred Rogers to this country,” says Davidson. “We defined what it means to be a good neighbor. When I see what is happening around the country, it makes me sad. But I could feel those emotions and not do anything about it, or I could focus on something hyper-local that could make a difference.”

And Hello Neighbor is already gaining widespread support, even before its official launch. Pittsburgh City Councilors are behind the effort, and people from cities like Bakersfield, Calif., Wichita, Kan., and Chicago have already contacted Davidson asking for advice on how to start their own programs. Social scientists at Carnegie Mellon University feel the concept can provide valuable research opportunities. The program was even mentioned in the New York Times.

Even in a time of growing fears toward immigrants and refugees, says Davidson, the excitement around Hello Neighbor shows there might be an equal or even stronger movement to embrace our new American neighbors.

“We are really seeing an increase in the people that want to help,” Davidson says. “This work really requires high [contact]; you can’t just drop off a bag of coats. People want to do more; they want to build deeper relationships.”

Davidson has been working with the refugee-resettlement agency at Northern Area Multi-Service Center (NAMS) since returning to Pittsburgh, her hometown, a few years ago. While there, she noticed some of the refugee families were living a fairly isolated existence. But Davidson believes that in order for refugees to successfully integrate into American life, they need to spend time with native-born Americans. She says that for Hello Neighbor to work, people need to “sign on for a real commitment.”

“That could create a real relationship between the two that could be invaluable,” says Davidson. “For the refugees, it could help them create a better life in America.” And Davidson says it can help native-born residents realize they might have more in common with immigrants than they think.

“There are certain cultural barriers that can be broken if you actually get to know someone from a different culture,” she says.

Last month, as a precursor to Hello Neighbor, Davidson held a Valentine’s Day craft party. Davidson thought “if only 10 people show up,” that would indicate there was no demand for the program. But more than 300 people came, including 75 refugees, Pittsburgh Mayor Bill Peduto and city councilors Dan Gilman and Corey O’Connor.

Hello Neighbor should launch by the end of March. Davidson is currently self-funding the program and soliciting help from foundations and private donors. “I am not letting a lack of funding stop me,” says Davidson. “I believe that launching it will provide a bigger draw for funders, since it is something I am actually doing and not something I just want to do.”

Kheir Mugwaneza, director of refugee resettlement at NAMS, is excited for Hello Neighbor to begin and believes it can provide needed help to refugee agencies.

“I think it’s a good thing. I think it is something that we have been all doing, but not in a structured way,” says Mugwaneza. “It is exciting, we are lucky to be in a community that is very supportive.”

When refugees arrive in the U.S., resettlement agencies like NAMS set them up with places to live, find them jobs, and give them federal funding that amounts to about three months’ rent and food costs. Agencies also help them find English-language and assimilation classes. After 90 days, the assistance drops off significantly.

“We can use as much support as we can [get],” says Mugwaneza. “This is an area where if we have [Hello Neighbor] in a more structured way, it would be very, very helpful.”

Davidson believes Hello Neighbor can highlight cultural similarities by putting pairs of native-born residents and refugees in public. “Maybe no one has ever seen a group of 20 people in hijabs or Muslim attire at a Pirate game with 20 American friends,” says Davidson. “Think what kind of opening-up opportunity that can create.”

Nichole Argo, a social-science researcher at Carnegie Mellon University, agrees. She says that, psychologically, it’s typical for people in vulnerable situations to fear refugees and immigrants, since they perceive their livelihoods could be at risk from more competition. Argo says that in Western Pennsylvania, it’s easier for populations in hard-hit areas like Cambria and Armstrong counties to fear immigrants, since those areas suffer from high unemployment and opioid-abuse problems.

This perception can be easily perpetuated by rhetoric from leaders like Trump.

“For people that are unstable, once you start to say that this is OK to [fear immigrants], then people feel it’s easier to do it,” says Argo.

On the flip side, however, Argo says that breaking through that perception is easier than many expect, since face-to-face connections are more powerful than imagined fears. “Psychology shows such predispositions can go away relatively quickly,” says Argo. “When you meet a real person, those prejudices can drain away almost instantly.”

Argo feels Hello Neighbor can be important in shaping norms, since norms are shaped by what we see on a day-to-day basis.

“People are more likely to behave for what they see as the norm in their area,” says Argo. “We are very influenced by norms.”

And Pittsburgh City Councilor Dan Gilman says establishing a new norm of friendship between native- and foreign-born Pittsburghers should be easy, given the city’s history. Pittsburgh’s immense growth in the first half of the 20th century (when it added 330,000 people during a 50-year span) was driven primarily by European immigrants from Germany, Poland, Ireland, Ukraine and Italy, as well as African Americans moving in from the American South.

This trend actually continues today, though in much smaller numbers. Pittsburgh’s metro area actually gained about 12,000 foreign-born residents from 2010-2015, a time when the area lost the same amount of native-born residents. Today’s foreign-born growth is primarily driven by Chinese, Indian, Bhutanese and Central and South American immigrants.

Gilman recently introduced a package of legislation, titled the City for All agenda, to accommodate this changing population. The motions and resolutions, which passed unanimously, encourage more cooperation between city government and native-born residents, and immigrants and refugees. Gilman is proud to see Hello Neighbor start in Pittsburgh and believes it fits perfectly with the idea he was highlighting with his legislation.

“Pittsburgh was built on the backs of hardworking immigrants who first came to the city in search of better lives for themselves and their families,” Gilman wrote in an email to CP. “As a new generation of immigrants and refugees come from across the globe to Pittsburgh to learn, work, and live, the City must extend the same welcoming hand it did for previous generations.”

Davidson believes Hello Neighbor’s concept can go beyond improving relations between native- and foreign-born residents. She thinks it could be applied to any vulnerable or misunderstood population.

“There is a reason why ‘refugee’ is not in the name,” says Davidson. “We will be including immigrants, too. And I think this idea can apply for seniors, for veterans and for the homeless. The idea of us wanting to have stronger communities, in a world where we are overworked and our community ties are weaker than before, there is an incredibly opportunity to solve that.”