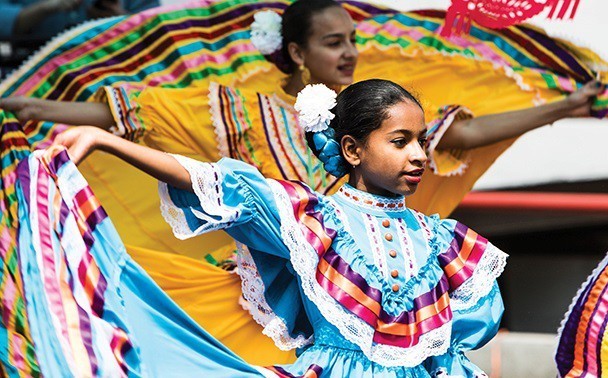 Photo by Luke Thor Travis
A group of young dancers at a Cinco de Mayo festival in Beechview in 2016
The growth of the Latino community in Beechview and throughout Pittsburgh has been small, but significant. And with this growth, especially in the student population, has come a corresponding need for services, according to Monica Ruiz, director of Latino service group Casa San Jose.

And a new program is hoping to fill that gap.

Casita at Brashear High School in Beechview is the first program of its kind in Pittsburgh, and it about two weeks ago at the Pittsburgh Public School. The program acts as a “community resource center that advocates for and empowers Latinos by promoting integration and self-sufficiency,” according to Casa San Jose’s website.

The goal of the Casita is to supplement the support systems already in place at Brashear, such as Casa San Jose’s after-school program called Jóvenes con Propósito — Youth with Purpose — and to reach the students who might be unable to stay for after-school or weekend programming.

“We wanted it to be an extension of services,” says Ruiz . “We’ve noticed … that there’s more need in the community. The needs are drastically changing, and not for good, so there are some folks that [Casa San Jose] doesn’t reach. We have an after-school program at Brashear, but many of those kids are unaccompanied minors, or here without a parent. What happens is that they’re at school all day, and then they work all night, and they go back to school all day. They don’t have access to the services that some of them need, like emergency assistance or clothing or just help reading mail sometimes.”

According to Ruiz, students can come to Casita for a wide array of social assistance, including referrals for housing, medical and legal needs, emergency funding, Know Your Rights sessions, community support and aid reading documents. Both Casa San Jose and Brashear’s Casita also offer English as a Second Language (ESL) resources.


We’re very excited to start our Casita at @BrashearHS. At Casita #Latinostudents will find academic support, info about migration issues & much more. Big thanks to #Brashear for facilitating a space for #LatinoYouth to find & access resources that benefit them! #SpreadTheWord pic.twitter.com/8tMHV3dDxT

A recent article in PublicSource reported that ESL students comprise about a quarter of Brashear’s enrollment. With around 300 ESL students, the population is the largest in the Pittsburgh Public School district. PublicSource also reports an 85% ESL enrollment increase in PPS since 2007.

Casa San Jose is listed on the district’s website as a resource for families in the district who may benefit from ESL services.

“We’ve had a very good relationship with Brashear for many years. It’s always opened its doors to us and we’ve been able to help many, many families,” Ruiz said. “We’re constantly trying to create new programming to benefit the needs of the students.”

Casa San Jose was started about five years ago by the Sisters of St. Joseph of Baden to further the ongoing work of Sister Janice Vanderneck, according to Executive Director Monica Ruiz.

“Sister Janice had been doing outreach with the Latino community for about 15 years, and had noticed that there was a huge growth happening and there weren’t services in place to meet the growing needs of the community,” she said.

Ruiz said that having a relationship with Brashear, both through the new Casita and the programming that had already been in place for years, has been a very positive experience.

“Even though it was a little bit reactionary, some of the things we’ve been able to put in place have been proactive, which is the whole reason for Casita,” she said. “We know there’s a lot of kids that we’re not reaching, and we want to make sure they know we’re here.”

For Latino youth, Casita can make a world of difference.

“They’re very vulnerable,” Ruiz said. “To have this extra resource is really going to help them not only now, but also moving forward in the future.”