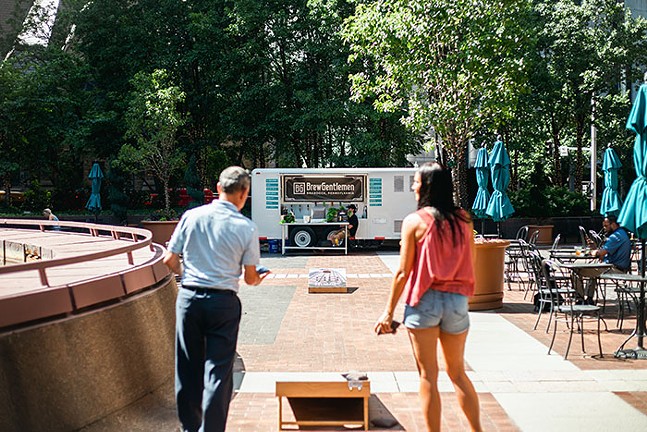 For as incredible as the local beer scene has become, there is a glaring weak point in Downtown Pittsburgh. Despite the high foot traffic and active community, Downtown is entirely lacking breweries, with only a couple of beer-focused taprooms whose offerings often fall short of many other places around the city.

That’s what made Brew Gentlemen’s summer-long pop-up at the Allegheny Overlook such a welcome addition in 2021. With a combination of great beer from the longtime Braddock staple and gorgeous views overlooking the river, the experiment was an overwhelming success.

Unfortunately, due to construction on the Roberto Clemente Bridge, the Allegheny Overlook wasn’t a possibility for 2022. But Brew Gentlemen pivoted, making sure that those seeking an enjoyable outdoor activity in Downtown this summer could still have a unique experience.

The Steel Garden, now open from 3-8 p.m. every Tuesday through Saturday, is a takeover of the U.S. Steel Tower Plaza on Grant Street. A partnership between Brew Gentlemen, U.S. Steel, and the Pittsburgh Downtown Partnership, the pop-up is a wonderful and welcome addition to the Downtown landscape.

The patio, surrounded by stunning Downtown buildings, offers a gorgeous view of the city. Brew Gentlemen’s table, located right in the center of the plaza, offers pours of its flagship IPA General Braddock’s (which, if you haven’t tried it, you should change that ASAP), as well as a collection of other summer IPAs, lagers, and fruit beers.

I had the Akamai Double IPA, a phenomenal example of what the brewery does so well. Pillowy soft yet 8% ABV, juicy and flavorful while still retaining its hop undertones, the beer showcases all the reasons that Brew Gentlemen is such a staple in the city.

Yet, the beer is only part of the draw of the Steel Garden. As Downtown starts to come back into full swing, people are looking for places to go for happy hours, work events, and to kick back when they get out of the office. The Steel Garden has you covered, and I mean that literally. I sat in a covered coworking space, complete with a variety of seating and a relaxed atmosphere.

There’s cornhole, a stage for live music, and there will be a rotating cast of food trucks joining the fun. The energy and the joy from people working their way back to spots like this were contagious on the day I visited. The Steel Tower promises to be a great place to hang out this summer, a place to tell your boss you’re “getting some work done,” and, at the very least, a rare Downtown spot to get a killer pour of beer.