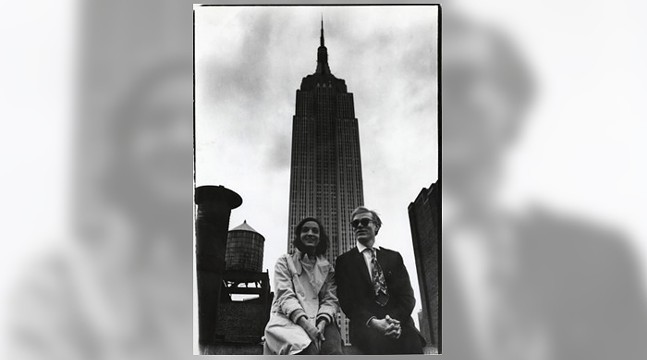 Photo: David McCabe
Andy Warhol and Marisol with the Empire State Building, 1965, part of Marisol and Warhol Take New York at The Warhol
The Andy Warhol Museum is still uncovering works that reveal a lot about the famed pop artist, even decades after his death in 1987. Jessica Beck, the Milton Fine curator of art at the museum, says new discoveries not only give insight to Warhol, but to others in his circle of fellow artists and performers, as well as lovers and ingénues who inspired him.

One of them, a mysterious figure named Marisol, caught Beck’s eye. Now audiences will get an in-depth look at this spectacular, somewhat obscure artist through the museum’s latest show, Marisol and Warhol Take New York, on view through Feb. 14, 2022.

The show spans the museum’s fourth and second floors, using works from The Warhol’s archives and opened time capsules, and borrowed Marisol pieces, some of which have traveled from as far as Cologne, Germany, and have never before been shown in Pittsburgh.

Using everything from installations and never-before-exhibited films to intimate photos and postcards, Marisol and Warhol Take New York illustrates the artists’ relationship, parallels their careers throughout the 1960s, and demonstrates how the late Marisol — real name Maria Sol Escobar — may have influenced some of Warhol’s most noted works.

“The idea for this started five-plus years ago, thinking about Warhol’s films from 1963 and how Marisol kept showing up in them, and me thinking, 'why haven’t I heard of Warhol and Marisol together?'” says Beck. “Why is Marisol not a more prominent person in the history of Warhol’s Silver Factory, early-60s era?”

The films she references were originally showcased in Exposed: Songs for Unseen Warhol Films, a 2014 music program focused on 15 short Warhol films that had not been publicly screened before. Some of those films are now being projected as part of Marisol and Warhol Take New York, including a digitized, 16mm color home movie of a 1963 summer getaway in Lyme, Connecticut. The candid footage, taken before Warhol started seriously working film into his practice, shows why Marisol became an early Warhol muse, her arresting gaze drawing the viewer in.

The film, along with others documenting Marisol, shows that Warhol clearly had a fascination with worldly, glamorous people, even before working with model Edie Sedgwick. Compared to his humble upbringing as a poor, working-class child of Carpatho-Russian immigrants in Pittsburgh, Marisol was born in Paris to Venezuelan parents, studied at prestigious art schools, and spent much of her life traveling the world.

That she has flown under the radar for so long is especially surprising given how highly regarded she was, not only by fellow artists like Warhol but the art world at large. As Beck points out with the help of various pieces displayed throughout the show, Marisol made the cover of Time and was considered one of the most important artists of her generation.

Beck examines how, despite her prominence, Marisol became a footnote in the history of pop art. This comes through in some of Marisol’s blocky, life-sized, assemblage sculptures, including “Dinner Date,” which shows the artist eating TV dinners with herself. Beck believes this was in response to much of the sexism regarding female artists at the time, saying that reporters often asked Marisol why she didn’t have a husband or when she was getting married, questions that were not asked of her male contemporaries.

Beck suggests that Marisol also was not treated kindly by history due to her shifting styles and experimentation later in her career when she became more influenced by pursuits like scuba diving.

Beck stops short of implying that Marisol directly influenced Warhol — plenty of art historians have already accused the pop artist of stealing ideas — and lets the works, which are strategically placed together throughout the galleries, lead audiences to their own conclusions. 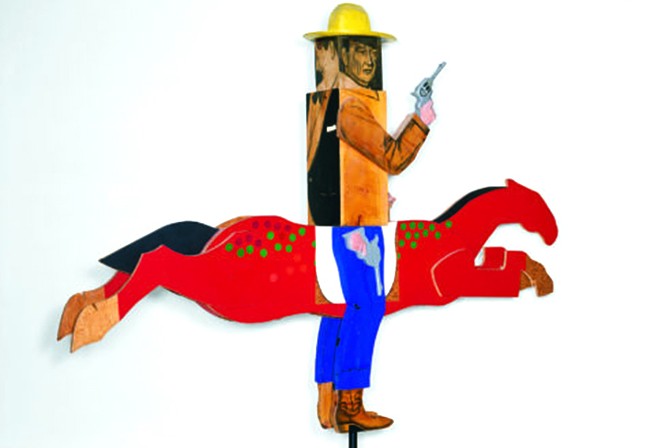 Photo: Courtesy of The Andy Warhol Museum/Estate of Marisol / Artists Rights Society, New York
"John Wayne" by Marisol, part of Marisol and Warhol Take New York at The Warhol
It’s tough to deny the coincidence of Marisol creating a sculpture of Western star John Wayne, presenting him astride a horse in what appears to be whimsical, large-scale weather vane, around the same time that Warhol was doing his equally sizable silver prints of Elvis Presley in cowboy gear. The two also integrated consumer brands, with Marisol’s odes to Coca-Cola displayed alongside Warhol’s uber-famous Brillo Box and Campbell’s Soup works.

While the extensive collection more than covers what Beck refers to as the artists’ coming-of-age story, the museum will also host an array of programming inspired by the exhibit. This includes Marisol Takes The Warhol! and Counterbalance: Redefining the Archive on Sat., Oct. 23. Marisol Takes The Warhol! is an all-ages afternoon event featuring art-making activities. It will be followed by Counterbalance: Redefining the Archive, an evening of experimental art films by female filmmakers, all curated by Pittsburgh artist Alisha Wormsley, and music by Pittsburgh-based DJ, Jessica Fuquay.

Beck says that she wants Marisol and Warhol Take New York to be seen less as a retrospective about the two artist friends, and more as a way of using Warhol’s association to reclaim Marisol’s place in a major art movement.

“It’s really just this look at their friendship, and then to put her centrally again in this moment, back into the New York pop story,” says Beck.
Marisol and Warhol Take New York. Continues through Feb. 14, 2022. 117 Sandusky St., North Side. Included with museum admission. warhol.org