“Do you want to play a supervillain in a live-action video series?” 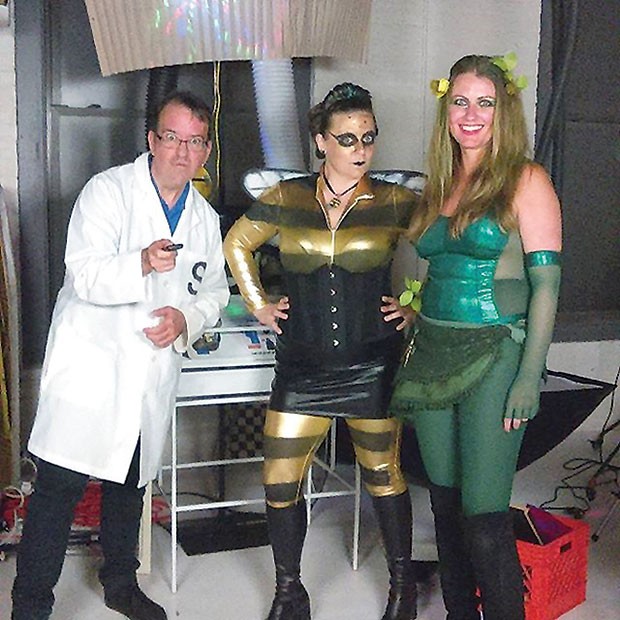 "Do you want to play a supervillain in a live-action video series?”

In all the years I’ve known Manny Theiner, he’s asked me a lot of questions. They usually deal with bands he’s bringing to town. Or a ride home after a show by one of the bands he brought to town. But this one took the cake.

If I remember correctly, the question came one night last summer at Howlers, between sets at a show where Manny was running sound. He mapped out the whole concept: Heroineburgh is a live-action video series that takes place in Pittsburgh. The extra “e” in the title should indicate that this has nothing to do with narcotics and everything to do with female protagonists who rid the Steel City of evildoers. Each installment would feature a different heroine, reflecting different ethnicities, and even sexual orientations, with feminist undertones. They acquire their powers through dark energy that has bombarded the earth and affected XX chromosomes.

Episode Three, “Everything’s Gone Green,” tells the story of Becky Bloom, a teacher and environmental activist from Squirrel Hill. Transforming herself into Gardenia, she saves the ’Burgh from an evil scientist and a female antagonist who scheme to hold the city hostage through the use of a massive greenhouse effect. An actor was needed to play Dr. Shvitz (a Yiddish word that translates roughly to “sauna” or “heat”). That’s where I came in.

The offer seemed flattering, but challenging. I can be a cut-up, imitating friends or throwing out a good quip in an office meeting to break the tension. But when offered the role, my mind flashed back to a promotional video at my old workplace. In this short clip, two co-workers improvised roles as skeptical yinzers, with exaggerated accents and quizzical facial expressions that would make Pittsburgh Dad jealous. My supporting role? Stiff. Nervous. Wooden. When I have to think about acting, it seemed, I overthought it and couldn’t be natural.

Besides, I don’t feel villainous. My dark side seems to stop at the corner of Cynical and Sarcastic, before heading back toward Optimisticville. The best evil-scientist characters come off as cold and menacing, ready to scare the bejesus out of anyone who gets in their way. My vision of mad scientists comes from Bugs Bunny cartoons, with two degrees of separation from Peter Lorre. (In fact, the way I communicate with most people is built largely on shtick from Warner Bros. cartoons.) When it comes to villains, I could relate more to the Joker or the Penguin from the Batman TV series. But Cesar Romero and Burgess Meredith never seemed all that evil; they just chewed up the scenery. That I can do, but Manny probably wouldn’t go for that.

Still, the offer seemed tempting. Besides, as my ego reminded me as it made a cameo appearance in my head, if I didn’t do it, someone else would and I wouldn’t be able to watch the video without thinking, “It could have been me.” So I accepted.

A few weeks later I met my co-stars Laurie Kudis (Gardenia) and Heather Kilgore (Devorra the Queen Bee) at a reading. This was no amateur stuff. The script was fully realized, with character development, action and the occasional Yiddish in-joke. We tweaked lines here and there, with encouragement to shape it to our own delivery. For my opening line, I reacted to some bad news by shouting “Dammit!” I say that half-a-dozen times a day, so I thought this could be a breeze. Dr. Shvitz is driven to treachery because he feels misunderstood, and that no one listens to him. I can totally relate to that.

Shooting started a few weeks later. While the exterior shots took place in Squirrel Hill, almost all of my scenes were filmed in a Lawrenceville loft. I was usually the first one there. Laurie was a sight to be seen in green. Heather looked menacing in Queen Bee makeup. I got a lab coat.

Throughout filming, I couldn’t shake the delivery of Cesar Romero’s Joker, wild-eyed and enthusiastic at all times. Laurie and Heather kept cracking up at my quips between takes, so I didn’t tone it down.

With four episodes done, several of the characters appeared at the recent Steel City Comicon. Sadly, Dr. Shvitz couldn’t get his act together. This weekend will be the first time I’ve seen any of the footage we shot. I’ve held off in hopes that it’ll be better than I thought. But if it isn’t, at least I’ll be proud of the scene where I decided to move my hands like a cat scratching at a door, pretending to manipulate a computer that wasn’t really in front of me. Look for it.