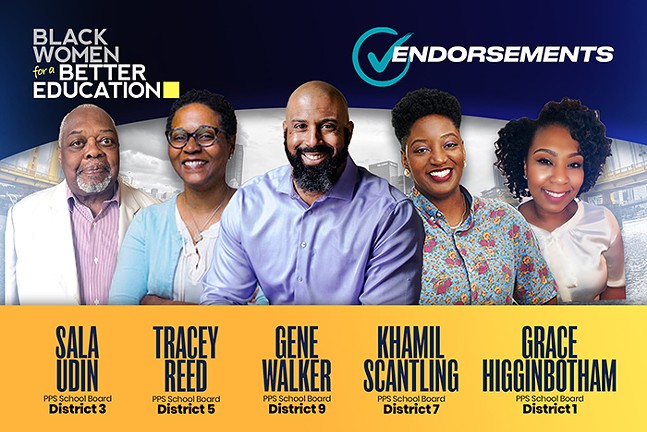 Image courtesy of Black Women for a Better Education
Black Women for a Better Education's slate of endorsed Pittsburgh Public School board candidates
This year, issues at Pittsburgh Public Schools have taken on an increased scrutiny in light of the COVID-19 pandemic, a big budget deficit, and a proposed — then rescinded — plan to close several school buildings.

With the PPS student population being majority Black, all of these decisions impact Black people the most. A recently launched political organization, Black Women for a Better Education, understands this and is furthering their mission of educational equality with their slate of endorsements for the upcoming PPS school board elections.

Black Women for a Better Education is a grassroots organization comprised of PPS “parents, alumni, former employees, retirees, and concerned community members” committed to ensuring high-quality education for all Black children in PPS.

Recently, Black Women for a Better Education formed a Political Action Committee to endorse candidates in five districts whose school board seats are open during this primary election cycle. Every PPS school board race this cycle has at least two candidates and some are three-way races.

The group’s slate includes District 1 challenger Grace Higginbotham, set to take on incumbent PPS board president Sylvia Wilson. Higginbotham, an educator, says she felt “compelled to alter her path” after learning more in-depth about the racial divides within the American education system.

Walker worked as a program manager within the Pittsburgh Promise scholarship program, which helps provide PPS students a path to higher education. He eventually became Director of Workforce Development at the promise program in 2015, before leaving to start his own nonprofit in 2018. Walker's top priorities are accountability in the budget, ensuring equitable access among students to technology, and increasing and retaining diversity of PPS teaching staff.

In a Facebook post, Black Women for a Better Education said these candidates are informed, will challenge the status quo, and want the best for Black kids in this region.

This is not the first time Black Women for a Better Education has stepped onto the political scene.

Since their inception in May 2020, the group has been vocal critics of current PPS superintendent Dr. Anthony Hamlet. They have gone so far as to publicly call for his contract to not be renewed on the grounds of his leadership record, financial management, professionalism, handling of the COVID-19 pandemic, and mismanagement of equality and equity initiatives across PPS. School Board members vote whether or not to renew PPS superintendent’s contracts.

“We do not take lightly the implications of Black women asking a school board with a Black president to not renew the contract of a Black superintendent of a school district with majority Black students,” says a letter Black Women for a Better Education sent to the PPS Board of Directors in June. “We are aware of the optics, however, we demand better for our Black children.”

The letter also referenced the 2019 PPS equity implementation plan called “​On Track to Equity,”​ but, the letter noted, “the plan is devoid of any real metrics and reads more like a list of aspirations.”

Black Women for a Better Education member Amber Thompson spoke to Pittsburgh City Paper in February and criticized PPS for failing to invest in Black families, which she says will contribute to them leaving the school district entirely.

“None of these neighborhoods are sustainable without families,” said Thompson in February. “Pittsburgh will not be moving into the future if it remains homogeneous.”

Black Women for a Better Education acknowledges Hamlet is not the origin of all of the problems at PPS, but the group remains steadfast in their mission and hope their endorsements of five Black school board candidates can bring about changes at the school district.

“We have had enough and our children deserve better,” says the letter. “If this democratically elected school board is not courageous enough to do what is right, we will make our discontent known at the ballot box during election time.”