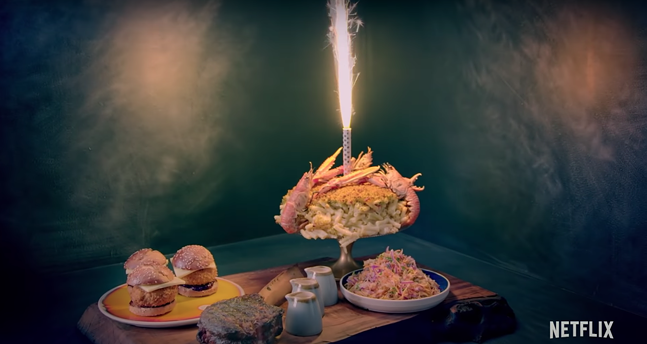 Screenshot of Crazy Delicious
During the past few months of incessant turmoil, I've wished more than once that I hadn't watched every available season of The Great British Baking Show. Watching nice people bake beautiful treats in an idyllic setting has a calming effect that American TV tends to veer away from. Luckily Crazy Delicious, a new Netflix show produced by the same British network as Baking Show, gives the same feeling with a different concept. (Confusingly, it is unrelated to the Netflix food docuseries Ugly Delicious).

In each episode of Crazy Delicious, three new contestants cook in three rounds for the prize of the "golden apple" (like Baking Show, there is no monetary prize). But they don't just make any old food; the premise of the show is based on the popularity of Instagram-popular creations like rainbow cupcakes or artfully assembled smoothie bowls or a cake that looks exactly like a hamburger. In each round, the contestants, who are all home cooks (though often with large Instagram followings), have to make a dish that is visually stunning and imaginative. But it has to taste good too, otherwise the judges chide the contestants for making something that only looks good in photos.

In the first round, contestants have to find unique ways to highlight one ingredient, like carrots or mushrooms. In the second round, they have to reinvent a classic food like pizza or grilled cheese. In the last round, they cook a feast based on a theme like barbecue or picnic. The results are usually incredible; a jerk-seasoned whole watermelon that looks exactly like glazed ham, a picnic platter that looks like a renaissance painting, or a terrarium made out of carrot cake.
In addition to making beautiful food, the contestants are cooking in the middle of a utopian forest. The set is indoors, so it's unclear how much of the background is made of props, real plants, and produce that was placed there for effect. But at the beginning of each round, contestants are told to go forage in the forest for the ingredients and pluck grapes from trees and dig up beets from the ground. Occasionally there are rabbits and hedgehogs hopping around. It all feels a little magical, and also a little biblical. In addition to the golden apple prize, the judges (including iconic Top Chef contestant Carla Hall) are referred to as "the Gods." As in "I hope the Gods like my volcano made out of pizza balls."

While the show could've ended feeling like a cheap way to capitalize on Instagram food trends, it instead brings more depth to the pretty fun food. It reminds us that if the food doesn't taste good, then what's the point of it looking good? But also that eating can and should be fun.

There are other oddities to the show, like the fact that "the Gods" all wear the same all-white outfit every episode and that the host, comedian Jayde Adams, wears the same sparkly tulle dress. And since the show is produced by British network Channel 4 and Netflix, most of the contestants are British, but a few are American. Unlike Baking Show, there are no confusing British desserts like "puds" or "tennis cake."

Crazy Delicious is a colorful, fun, and eccentric show. It has the gentle pace and atmosphere of Baking Show but the creativity of Willy Wonka. It's a treat to watch, and in this stressful time, giving yourself treats is more important than ever.