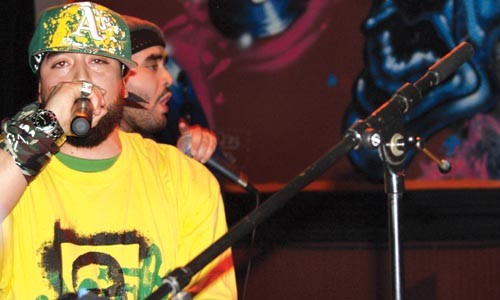 Hamza Pérez, who is likely Pittsburgh's lone Puerto Rican-American ex-drug-dealer and activist Muslim rapper, is the subject of a new documentary. But if you've seen New Muslim Cool, it's no surprise to phone Pérez and hear him answer quietly from the chair in an Oakland barbershop. Pérez, 32, asks whether the interviewer minds the buzz of the electric razor. Then he consults the barber to make sure the interview won't be "cramping his style."

Indeed, simply interviewing Pérez recalls watching Jennifer Maytorena Taylor's film: You feel the fascinating tension between the two halves of his life, of family-man ordinariness on one hand and, on the other, his almost routine smashing of cultural barriers in post-9/11 America.

The feature-length film covers events including Pérez's marriage -- and his efforts to get kids off Pittsburgh's streets; the birth of his youngest child -- and the 2006 police raid on his group's North Side mosque; breakfast with his wife and kids -- and his dispute with the Allegheny County Jail, after it revokes the security clearance Pérez needs to minister to prisoners.

"It's a film about presenting Muslims as regular human beings," says Pérez, from the barber's chair. "I think it's good for American culture and more tolerance between different religions and ethnic groups."

Brooklyn-born Pérez -- named Jason at birth -- moved to Worcester, Mass., with his family as a child. He spent his later youth on the streets. His drug-dealing ended, he says, at age 21, when an encounter with a Muslim holy man resulted in his conversion. (He was raised Catholic.) He and his brother and fellow convert Sulíman perform as the rap duo Mujahideen Team. The brothers -- Pérez quips that they speak "Arabic Spanglish Ebonics" -- use music for religious outreach and political consciousness-raising.

San Francisco-based filmmaker Taylor met Pérez in Pittsburgh in 2005, while researching a documentary about Muslim hip hop. Pérez's story reflected so many aspects of her subject -- artistic, cultural, political -- that she and her crew followed him for three years, through August 2008.

The independently produced New Muslim Cool has screened in Qatar and at the San Francisco International Film Festival, among other venues. It premieres locally with three public screenings this week. On June 23, it will be broadcast nationally to launch the new season of acclaimed PBS documentary series P.O.V.

For their part, Pérez and his colleagues first came to Pittsburgh, he says, to study rare manuscripts at the Sankore Institute of Islamic Studies. (Pérez follows traditional Islam, as opposed to such newer movements as the Nation of Islam.) The group stayed to found the mosque, a school and a youth center.

While Pérez is employed as an anti-drug counselor for a social-service agency, the film suggests he'd have a full calendar even without his own houseful of kids. For instance, Taylor finds him and his brother performing at a Muslim rap showcase, wielding both provocative lyrics and the flaming machete that's a symbol of their Puerto Rican heritage. And besides his jail work, Pérez offers community workshops where he compares the business of drug-dealing to the Fortune 500 world: "It's all infinite ho'ing."

The film also explores the June 2006 police raid and its aftermath. It appears that the police were seeking a convicted felon fleeing gun charges in Utah, whom they traced to the mosque. But for Pérez's community, which already believed itself under police and FBI surveillance, the raid -- which came during weekly prayer services -- was especially hurtful and baffling.

To Taylor, the raid's drama became interior: "It was Hamza ... being so hurt and angry about something and then coming to grips with it."

"We're an open book," says Pérez today. "We don't got nothin' to hide from the FBI."

Indeed, one Mujahideen Team CD is titled The Clash of Civilizations, and the group's very name indicates that the duo is engaged in jihad. Meanwhile, the county jail's revocation of Pérez's security clearance -- which he consults the ACLU in an attempt to regain -- is traced to criticisms of the government he leveled in an interview with a music publication.

Yet as Sulíman notes in the film, "jihad" doesn't mean "holy war": The term translates as "struggle," and can even connote the battle to master oneself. Ultimately, too, Muslim Cool documents much more conciliation than confrontation, including Hamza Pérez's role in a Pittsburgh-based effort to compile a book of Jewish and Muslim poetry.

In fact, Perez and his family recently shared Passover with the book project's editor, Carol Elkind. "These friendships are real," says Taylor.

As Pérez says in the film, "I see every single person as an opportunity to get closer to God."

Taylor and Perez will attend both screenings, with a panel discussion following each. Melwood Screening Room, 477 Melwood Ave., N. Oakland. 412-682-4111