"We were interested in how Riot Grrrl has influenced our friends, peers and artists working today." 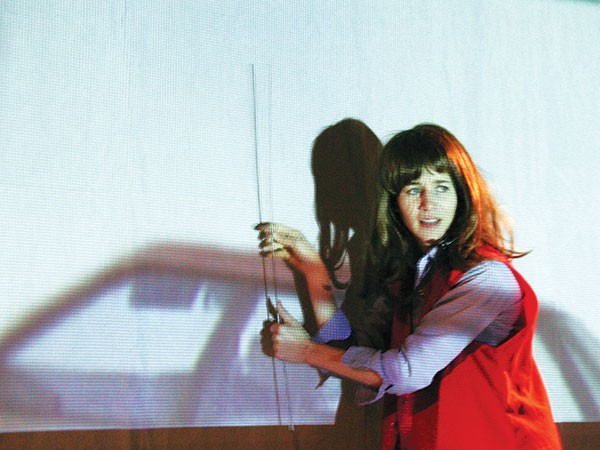 In the early '90s, a movement known as Riot Grrrl began to emerge, beginning in Washington, D.C., and the Pacific Northwest and quickly spreading across the world. A punk-rock, feminist reaction to sexism, racism and homophobia, Riot Grrrl was characterized by a DIY aesthetic manifested in art, music and political and social action. But while bands like Bikini Kill and Bratmobile have become a kind of shorthand for the movement, Alien She, a new exhibit at Carnegie Mellon's Miller Gallery, explores Riot Grrrl from a broader perspective.

"Most coverage of Riot Grrrl is through the lens of music history," explains curator Astria Suparak, via email. "[Curator Ceci Moss and I] wanted to focus on contemporary artists influenced by Riot Grrrl — an area that hasn't been covered and that we are close to."

Taking its name from a Bikini Kill song, the exhibit focuses on the work of seven artists whose work is informed by some aspect of the Riot Grrrl ethos. The collection is extremely diverse, ranging from Allyson Mitchell's framed T-shirt emblazoned with the phrase "I'm With Problematic" to Miranda July's video chain letter for "lady moviemakers." There is also Tammy Rae Carland's autobiographical photo series: One entitled "I'm Dying Up Here (Glitter Drapes)" depicts a stage set for a standup comedian, stark and lonely against a sparkling backdrop.

With Alien She, Suparak and Moss — both of whom identified with the movement when it was most active — aim to reflect both the diversity of the participants and the output of the movement by including handmade posters and zines, playlists, band shirts and other archival pieces representing Riot Grrrl scenes in the U.S., Canada, Europe, and South America.

Which is not to say that Alien She is primarily a history lesson. "[We] were interested in how Riot Grrrl has influenced our friends, peers and artists working today, and the impact it has had internationally, with [imprisoned feminist punk band] Pussy Riot in Russia and many new Riot Grrrl chapters opening around the world," Suparak explains. "Everyone we personally knew in Riot Grrrl is still, 20 years later, involved with art, music, education and/or activism. You can see the effect of this grassroots, creative movement on what we are all doing now."