New Invisible Joy returns to the stage with Kontakt 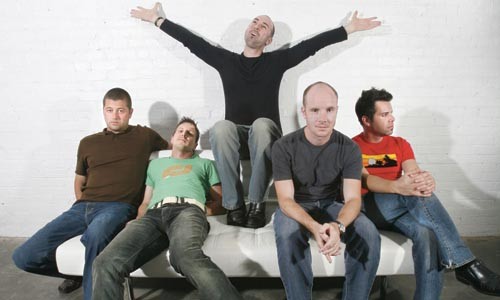 Photo by Heather Mull
Rejoice: New Invisible Joy
In early 2005, New Invisible Joy decided to take a hiatus from playing live, with the idea of taking a couple of months off to record material the band had been stockpiling -- an artistic decision more than a practical necessity. "Most local bands are working," explains guitarist Mike Gaydos, "and are really not afforded the opportunity to write enough material to record a record, and then put it out so that when you go and play out, people are hearing it for the first time."

It seemed like a worthy goal at that time for a local group many considered ripe for breakout commercial success. During its seven-plus years on the scene, the band's albums Pale Blue Day (2000) and Trust (2004) had drawn raves from the local media, and the band was opening for prominent national headliners and touring regionally. Most importantly, New Invisible Joy had a well-earned confidence in the quality of its material and in the strength of its four-man lineup, unchanged through all the ups and downs that fracture most local groups.

What the members perhaps weren't prepared for was how long that was really going to take -- and their own battle fatigue. "Once we decided to do that, the first couple of months everybody was like, 'You know what? We're real tired,'" says Gaydos. "We'd been playing for eight years, practicing two and three times a week, all band all the time." And with that, a couple of months became more than two years.

Now New Invisible Joy is ready to play live again, with a fresh batch of tunes -- just don't say they're "back." "It's an ongoing thing, just like it always has been," Gaydos emphasizes. "Even when we were doing the record, the band was an ongoing venture, it's just we kinda turned into The Beatles circa '68 at the time!"

That record is Kontakt, a set of 12 songs recorded by Chris Lohr of The Yards at his project studio in Brentwood, and while it's hard to wrap your mind around the fact that some parts of the songs were recorded over two years ago, the care and craft that has been lavished on them is evident throughout.

From the conceptual packaging to the interwoven themes of mortality and loss, Kontakt is a pop-rock record by a Pittsburgh-based group that has no business in the local CD section; bearing traces of The Psychedelic Furs, U2, Coldplay and The Verve, Kontakt would certainly sit comfortably on a shelf between the latter-day efforts of those bands. Gaydos' guitar style echoes the textural players of the '80s, from Johnny Marr to The Edge to Andy Summers, and when vocalist John Schisler cranks the soaring opening song, "Where Is It Written," the quality of his major-league pipes is a bit of a shock. Holding these elements together is the understated glue of Evan Handyside (bass) and Brian Colletti (drums).

With the new album there have been some changes, though. Gaydos took it upon himself to learn to play keyboards and incorporate them into the band's sound for the first time, especially on songs like the burbling "Close Your Eyes." For the CD release show on Fri., Sept. 21, at the Rex Theatre, Phil MacDowell is sitting on keyboards, covering the parts Gaydos recorded in the studio, and local filmmaker Jessica Fenlon has created a long series of visuals that will be projected -- also a first for the band.

"When we saw the Doves a few years ago at Rosebud, they had like a real cool late-'60s, early '70s thing going on with film in the background" says Gaydos. When the time came to plan the release show, the band contacted Fenlon through Pittsburgh Filmmakers and began collaborating. "Our band now is at this stage, going on 10 years of being together, all the same guys -- it's almost like this old men's club," Gaydos chuckles. "We get real nervous about outsiders."

Kontakt is already receiving some local airplay; following the release show, NIJ plans to continue booking and playing shows. With that comes some excitement, and also some nerves.

"It's now just a matter of keeping the fingers crossed, and hoping that people will remember," says Gaydos with a laugh. "Because it has been that long."