New Horizon's Do Lord Remember Me

Show about slavery days features a powerful ensemble of six 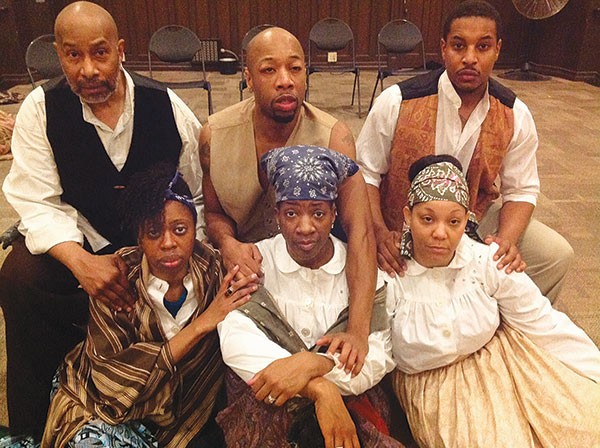 DO LORD REMEMBER ME

Like a collage of music, dance and drama, Do Lord Remember Me, at New Horizon Theater, recounts true stories of the grim history of slavery in the United States.

Playwright James de Jongh has drawn from recorded interviews of ex-slaves conducted as part of the 1930s' Federal Writers Project.

Do Lord Remember Me is divided into six "scenes," each with a different focus.  There's "Children," "Hush Harbors" (secret meetings of slaves in the forest), "Getting Enough to Eat," "Superstitions," "Rebellion" (recounting the story of Nat Turner) and "The War." De Jongh has framed the script beginning and ending with the story of a disfigured slave (eventually played by all three of the actresses) and how her face came to be so deformed.

Director Eileen J. Morris has assembled a powerful cast of six triple-threat performers, all of whom can act, sing and dance.

Kevin Brown, Delana Flowers, Mils James, Camille Washington, Karla Payne and Gary Perkins III form a strong ensemble, playing a variety of characters — both black and white. While audience members might have a personal favorite, this cast is a true ensemble, with no one performer outshining the others. They are all just that good.

To the credit of musical director Henry Biggs, the singing (which is a cappella) soars. Stand-out musical numbers include: "Balm in Gilead," "Motherless Child,"  "Roll, Jordan, Roll" and the haunting "Do Lord Remember Me," which brings the performance to a close.

On the downside, the performance space at the Union Project is doing this production no favors. The acoustics are poor. The actors are projecting and enunciating well, but the echo in the hall makes hearing them difficult. And while it does add ambiance, director Morris should consider eliminating the underscoring of some of the scenes with recorded music and effects, as it only muddies the sound further.

Despite that (and the barely adequate production values), these stories and the remarkable actors who tell them shine through and still make for a memorable theater-going experience. Do Lord Remember Me is the ideal way to mark Black History Month.