Even so, Gray admits he needed a little refresher.

“I had to brush myself up on the swordplay,” laughs the New York-based playwright. “So YouTube is a director’s best friend.”

But de Moor, the latest collaboration between Gray and Pittsburgh theater company New Horizon, isn’t just about the clash of metal on metal. Gray wants to use the show as a way to look at a little known facet of the legend, of which he considers himself a big fan.

“I found out that there was a Black knight at his table, and I was like, wait a minute, let’s peel the layers back a little bit,” says Gray.

Through his research, Gray discovered more about the knight, named Sir Morien, who he says was the son of another knight and an African princess. Translated texts back up this claim, including one that says Morien was most likely the son of Agloval, and was conceived during the knight’s search for Lancelot.

The text says Sir Morien was also part of the quest for the Holy Grail, a religious artifact notable for its appearance in the Indiana Jones film series.

“I was like, man, this is fascinating,” says Gray. “I said, I want to tell a story around that.”

That story will come to audiences during a world-premiere run at Kelly Strayhorn from Fri., Oct. 29-Sun., Oct. 31.

Gray, who also acts in the play, says that, despite the grand scale of the concept, the staging will be “bare bones,” being set primarily in the overgrown courtyard of an old castle. He also describes it as a “whodunit” that also brings up questions about God and fate.

The legend of King Arthur conjures fantastic images of noble quests, courtly drama, and romance. But with the famous medieval tale comes a narrow, Euro-centric view of the era during which it was written, something that Gray hopes to broaden. Besides Sir Morien, he says de Moor will also touch on African rulers from around that time period.

The play comes at a time when other media has also set out to make medieval storytelling less white. The 2021 film The Green Knight stars Indian-British actor Dev Patel as Sir Gawain, a knighted nephew of King Arthur.

It’s this dedication to highlighting little known Black figures in history that attracts New Horizon to Gray. The company, described on its website as producing high-quality cultural events reflecting “African-American points of view,” has put on several of Gray’s shows, including Kings of Harlem, a story about the real-life basketball team that served as the basis for the famed Harlem Globetrotters.

New Horizon also produced other Gray works focused on real-life events, including The Girls of Summer, about an all-Black female baseball team who played during World War II; Black Angels Over Tuskegee, an off-Broadway show about the famed Black fighter pilots; and CowBoy, based on the life of Bass Reeves, a Black U.S. deputy marshal active during the country’s Wild West era.

While de Moor will stage in Pittsburgh, the cast comes from outside the city, some of whom TV fans may recognize. David Roberts, who plays Morien, appeared on the Netflix series Orange is the New Black. Thadeous Daniels had roles on The Blacklist and other shows, while Lamar K. Cheston boasts credits like the series Godfather of Harlem. 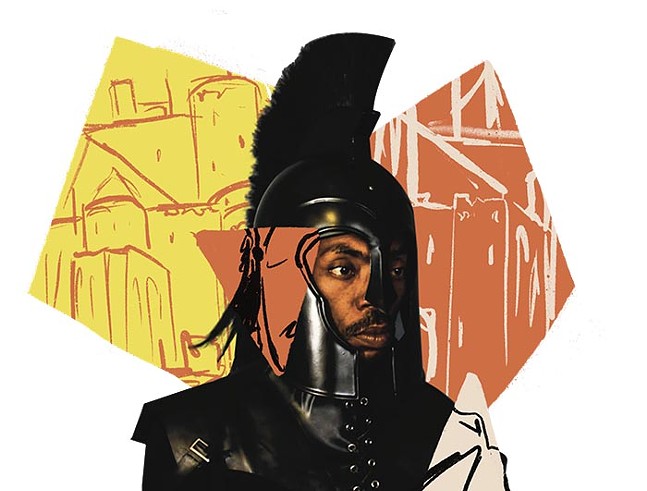 Photo: Courtesy of Layon Gray
de Moor at Kelly Strayhorn Theater
“A lot of the actors are coming in with a lot of television and film experience,” says Gray. “But they are theater to the heart, and I always use them with all my new pieces.”

Dr. Joyce Meggerson-Moore, a chairperson on the New Horizon board of directors, says the nonprofit theater company is pleased to show the world premiere of de Moor as part of its 30th anniversary season. The season kicked off earlier this year with Kings of Harlem, staged outdoors on a basketball court, both to fit the play’s theme, and to adhere with COVID-19 safety guidelines.

Meggerson-Moore says the play also fits in with the company’s mission of providing professional development for those interested in theater, allowing local people to interact and work with the seasoned New York cast and crew.

She adds that Pittsburgh audiences have the privilege of seeing de Moor before it goes on to the 2022 National Black Theatre Festival in North Carolina, and to New York City for an off-Broadway run starting September 2022. She even teases the possibility of a film adaptation by Gray.

Even so, she says the KST performances will be open to limited audiences as a precaution from the latest pandemic surge, so those interested should buy tickets sooner than later.

Gray says he believes anyone who sees the play should expect an eye-opening experience.

“I just want them to come in with an open mind, understanding that we’re touching on fantasy, but we are talking about real history, especially when we go into the African people who truly existed,” says Gray. “And I think mixing that fantasy myth along with historical facts that people don't know about, I think it'll be a conversational piece after the show.”
New Horizon Theater presents de Moor. Fri., Oct. 29-Sun., Oct. 31. Kelly Strayhorn Theater. 5941 Penn Ave., East Liberty. $10-25. newhorizontheater.org