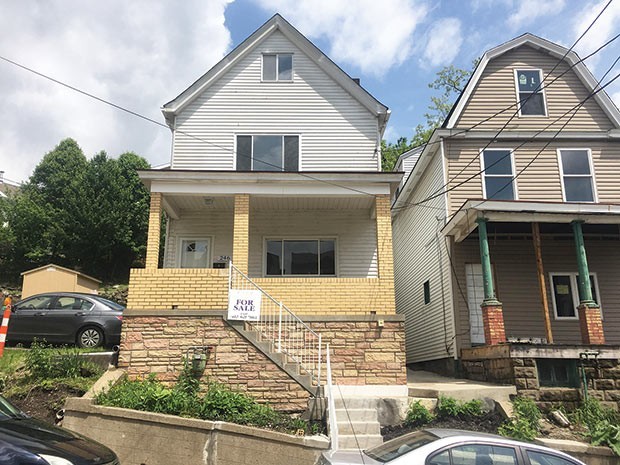 CP photo: Annie Brewer
A home for sale on Dunseith Street as part of Oakland’s Community Land Trust
On Wednesday, Pittsburgh Mayor Bill Peduto and the Urban Redevelopment Authority of Pittsburgh announced their latest effort to support affordable homeownership within the city.

The new program known as OwnPGH features a $22 million bond issuance to finance a fund designed to lower barriers to the acquisition of single-family homes throughout the city. Additionally, the URA plans to create a separate fund to help home buyers cover rehabilitation costs. The programs will initially focus on Larimer but could expand to other neighborhoods.

The plan also includes $4 million in funds the URA has allocated for second mortgages buyers can use to rehabilitate homes. The mortgages go up to $40,000 and will be offered at no interest with deferred repayment terms.

“Cumulatively these efforts of OwnPGH will not only get vacant homes and lots back onto tax rolls but improve neighborhood quality of life and help Pittsburghers accomplish the dream of homeownership,” said Peduto in a press release.

Peduto also noted OwnPGH could help efforts to utilize Pittsburgh's Land Bank, which had some recently announced overhauls, according to WESA. OwnPGH joins other programs focused on affordable homes for purchasing efforts like Community Land Trusts.

While this program has the potential to place around 100 currently vacant properties into the hands of owners who may not have otherwise been able to afford them, the proposed plan has been met with criticism, particularly over requirements like buyers needing a credit score above 660.

URA board member Jodi Hirsh said at a March 11 URA meeting that she worried OwnPGH could “become a tool that gentrifiers can use," according to PublicSource.

The program will initially be focused on targeted areas where loans could be made available to families of three or more with household incomes of as much as $116,200, as well as smaller families with incomes as high as $99,600.

Along with Hirsh’s concerns, URA board member and state Rep. Ed Gainey (D-Lincoln-Lemington) said the program should be structured in a way that addresses the homeownership gap between Black and white Pittsburghers. Gainey is currently running for mayor against Peduto and other challengers.

Despite concerns, the plan has progressed past the first procedural stages of the passing process. The URA is set to vote on OwnPGH later this month.