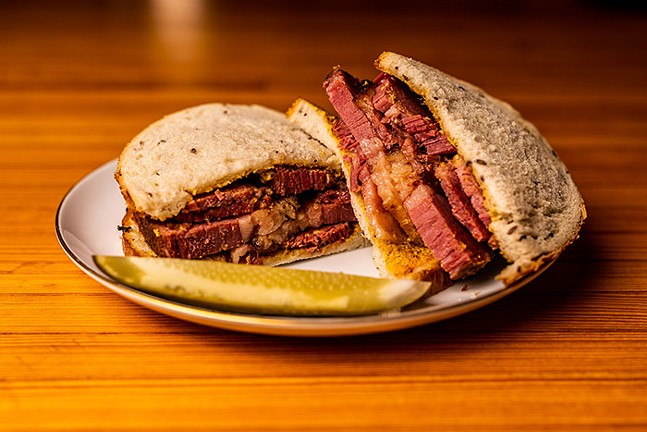 In his post, Barr said the poll taught him a few things. Matzah ball soup and pickles were a must-have on the truck’s menu, there were a handful of Pittsburghers out there who would eat chicken liver from a truck, and yes, an overwhelming majority of the city would patronize a Jewish delicatessen on wheels.

Barr’s story starts out like many others have during the pandemic: the restaurant he was working at, Acorn in Shadyside, shut down, and he was left jobless. Three months later, in what he calls his “quarantine midday dissociative state,” Barr started considering a food truck. The idea for a deli came from his mother, who informed him that his grandmother had once owned and operated a knish cart in New York City.

“The foods on my menu are foods I craved growing up, or interpretations of that food, like seitan pastrami, or the fillings of a vegan-stuffed cabbage turned into fried rice,” said Barr who, in his Reddit post, mentioned that these nostalgic foods are “sadly underrepresented” in Pittsburgh.

The truck’s current menu is short, featuring the Jewish classics that Barr mentions. There’s matzah ball soup, knishes, chocolate babka, cabbage fried rice, a pastrami sandwich (with a seitan version for plant-based eaters), and Dr. Brown’s Soda, because, as Barr writes on the list, “It’s not a delicatessen without Dr. Brown’s.”

“Delicatessen food has a long and distinguished history,” wrote Barr in an email, “but I'm doing things to freshen it up, a little bit. I'm especially proud of the matzo ball soup broth, but people will have to figure out why on their own.”

Barr makes his own pastrami, in a process he compares to Texas barbeque. But while the fundamentals of barbeque and pastrami are similar, there are a few key differences.

Pastrami is submerged in a wet brine, traditionally left to float for 7 to 10 days, then dried, smoked with sweet wood chips, and finished off with steam, he explains. “If you aren't having delicious burps 6 hours later, it's not real pastrami,” according to Barr.

Haskel’s Delicatessen launches officially on Wed., Nov. 18 at Commonplace Voluto at 5467 Penn Ave. in Garfield — just look for the truck with a klezmer band. The deli’s full schedule is available at hasksdeli.com.