“New England” IPAs are all the rage

“It’s when and how you utilize the hops, and then what varieties of hops you use.” 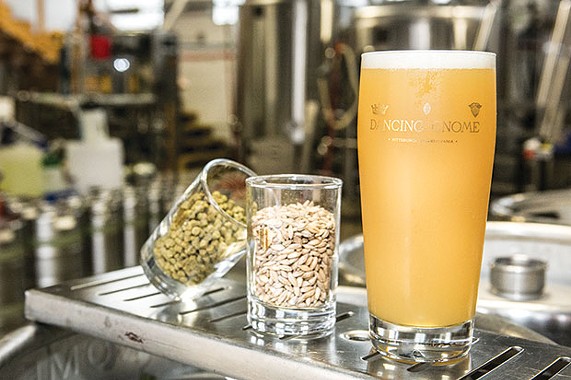 Bad Boy or Death Row? Wu-Tang or N.W.A.? Biggie or Tupac? In the world of ’90s hip hop, East Coast versus West Coast was a big deal. Fans chose sides, defending them vehemently and sometimes violently. Though that rivalry has, thankfully, quieted, there might just be another (albeit far more good-natured) one bubbling up in your glass.

Thanks to the hop-friendly climes of the Pacific Northwest and the vast number of hop-obsessed craft brewers in California and beyond, the West Coast has long been associated with American IPAs. In the 1980s, pioneering breweries like Sierra Nevada began loading beers with new American hop varieties. The craft-beer boom that followed saw West Coast brewers push the boundaries of bitter, with brews like Russian River’s Pliny the Elder attracting a rabid cult following. It didn’t take long for the West Coast to earn a reputation for big, bold and bitter beers.

In recent years, however, the West Coast’s position at the top of the IPA heap has started to look a little shakier. A new trend in IPAs has emerged, one that emphasizes the juicy, floral flavors of hops and dials back the bitterness. The style originated in the Northeast, with breweries like The Alchemist, in Vermont, and Trillium and Treehouse (both in Massachusetts) earning accolades for their hazy, flavorful IPAs. Though no one can quite agree on a name — you might hear the style called “New England,” “Northeast” or “East Coast”— one thing is for sure: Everybody wants some.

So what makes these beers so special? “As far as being different from ‘West Coast-style’ IPAs, it’s when and how you utilize the hops, and then what varieties of hops you use,” explains Andrew Witchey, owner of Sharpsburg’s Dancing Gnome. Though one of the newest breweries on the scene, Dancing Gnome has quickly made a splash with its brand of aromatic, hop-forward beers.

These new IPAs are perhaps most recognizable by their distinctive hazy appearance. Thanks to a variety of factors, including late and generous hopping, the specific yeast strain, and a lack of filtration, many “New England” IPAs look more like a glass of pineapple juice than a pint of Bud. That haziness is caused by suspended hop particulates, which create a rich mouthfeel along with huge hop aromas and flavors. Because of those volatile compounds, freshness is paramount, with the beer at its best weeks (if not days) after kegging or canning.

As far as the trend’s popularity, Witchey credits the approachable nature of the beer. “It’s very palatable across the spectrum,” he explains. “You have old-school hopheads that can appreciate it for the new-school hop nuances that it has. But you also have people who thought they didn’t like IPAs who have a sample and say, ‘Wow, this is not what I thought an IPA was.’ It’s so low in bitterness but high in flavor.”