The recipes were impressively confident and the execution excellent 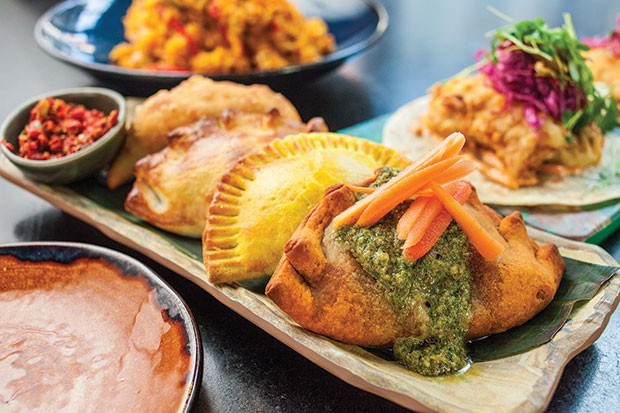 Forgive us if the opening of a restaurant called Pirata inspires a moment of musing about our beloved, underachieving Pittsburgh Pirates. The demands of synergy would seem to dictate that Pirata would, at the very least, have its crow’s nest on the North Shore, but instead it is located in a shiny new skyscraper just outside of Market Square. And while the piratical decor is overt, with treasure-map murals and thatched-roofed gestures toward island architecture, it managed to just sidestep the realm of kitsch.

The front room is dominated by a big, four-sided bar (where, yes, the ballgame was on), but the back dining room, designed to be closed off for private events, was cozier and more intimate, with warm lighting and upholstered chairs. We picked out a corner spot at the bar, the better to let the tender guide us through the extensive rum menu. Reviewing cocktails is outside our lane, so we’ll just say that Pirata offers a starkly different selection from the whiskey bars that dominate the city’s cocktail scene these days.

The food, on the other hand, was right up our alley. Spanning from Cuba to South America, with plenty of island stops along the way, this was a thoroughly modern selection that didn’t take any of its inspirations too literally. Or perhaps it did; our wallet doesn’t cover a sojourn to St. Bart’s to compare tuna tartare on a taco shell made from a crisp-fried slice of taro. Authentic or not, this was a brilliant combination, creating a delicate, but not bland, envelope for luscious tuna, while avocado built further richness and jalapeño brought suitable heat.

There were five additional tacos served on corn tortillas: two Mexican, two Jamaican and one original with pork belly and smoked sweet-potato puree. We chose arrachera, marinated skirt steak with grilled sweet onions and a sun-dried-tomato chimichurri. It was a lot of flavor in a small package: The meat was chewy but not tough; the chimi intense; and the onion provided a bit of sweetness and, if not brightness, then contrast.

Trinidad salt-cod fritters were a bit too salty for our tastes, but our more salt-friendly dining companion scarfed them down. We all enjoyed the meaty texture, more substantial than fresh fish but not chewy or tough. We also believe you can’t go wrong with cilantro-garlic-cream sauce, and Pirata didn’t.

The kitchen did take a wrong turn with a side of tostones, double-fried green plantains with mojo de ajo, a slow-cooked garlic and oil sauce. The sauce was flavorful, but where great tostones pair a semi-firm, vegetal interior with a crispy exterior roughed up from smashing, these large, flat disks were tough inside, despite being thin, and had very little crunch.

On the other hand, black bean soup with sofrito salsa and sour cream was superb: supple, savory, and deeply aromatic with sautéed onions, garlic and seasonings.

Depending where you go in Latin America, the empanadas vary widely, from crunchy dumplings akin to deep-fried pierogi to flaky, turnover-like pastries. Pirata’s were somewhere in between, with a wrapper that was a bit breadier than pie dough. It was certainly different from what typically surrounds Jamaican beef patty, which was the filling we tried. The beef was distinctly less fiery than typical Jamaican as well, but also had a better texture, crumbly and meaty, not smooth and pasty.

After all this, there was still more to explore, including half-a-dozen enticing entrees. Barbados fish fry, made with the fish of the day and served with fries and slaw, won out. That sounds like a church-basement menu, but not at any of the churches around here. The fish, a thick slab of red snapper in a dark, crunchy crust that we swore had hints of coconut, was superb — flaky and moist and more than substantial enough not to be overshadowed by that crust. Fries were simple shoestrings that ranged from crisp to slightly tender; they were delicious dipped in papaya-ginger tartar sauce that offered more zip than most fries-friendly condiments. The island slaw also stood out with cabbage, peppers, carrots, mango, seeds and berries. It was lightly dressed so that these myriad flavors and texture mingled to the fore, just held together by the hints of citrus.

Pirata’s pan-Caribbean concept might not be unique, but the recipes were impressively confident and the execution excellent, especially for such a new kitchen.