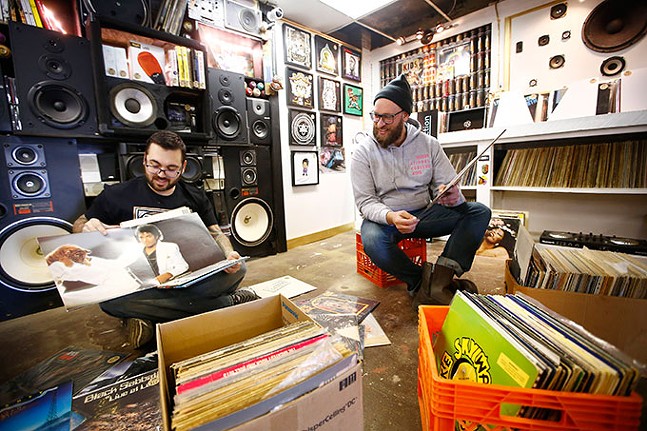 About two months ago, T.J. Harris was heading to a DJing gig when he discovered one of his cables was defective.

“There were literally two stores that I could go to at the time, and both were 15 miles away from where I was,” says Harris. “And I wasn’t far from Pittsburgh or anything.”

That got him thinking about other DJs in the city who probably face similar situations.

“[When] we have that emergency situation, and there’s nowhere we can go for DJ equipment anymore,” he says. “Pianos N Stuff is getting more and more away from it, Guitar Center has an awful selection that they never update, and there’s not really an owned and operated business for DJs. In Pittsburgh alone, I know there’s more than 250 of us that are working regularly.”

That experience led Harris to open The DJ Connection, a new store in Bridgeville offering vinyl, DJ equipment, clothing, print services, and more; plus, the space was big enough to house a second location for Harris' business partner, Josh Snider, the owner of Flower City Printmakers in Bloomfield.

“Our big focus for the store is pushing art and music culture as much as possible because that’s what both of us are interested in, personally,” says Harris. Flower City Printmakers, whose staff is made up of artists, does all the printing for The Rex Theater, Roxian Theatre, Thunderbird Café & Music Hall, and Spirit.

Harris and Snider have worked together for about five and a half years, sharing booths at wedding expos and the like, offering event assistance (i.e. entertainment and print materials) in one place. A combined storefront was a natural progression in their partnership.
“We will be keeping things separate in a way but will be sharing a location, and hopefully share many of the customers,” says Snider. “It’s very symbiotic.” 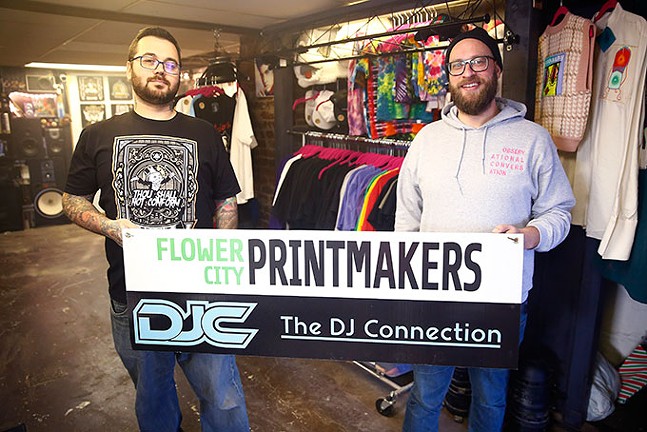 If it sounds like there’s a lot going on, there is. “But it’s a two-floor business,” says Harris.

Upstairs serves as a lounge where Harris can meet with clients. There’s a separate entrance right off of Washington Avenue, the main strip of Bridgeville. Visitors can access the retail space through the rear entrance; upon entering the lower level, visitors are greeted with clothing racks in addition to Snider’s production area. In the back of the store are records, more clothing (there’s also new and used books), and new and used DJ equipment that can be bought or rented.

The clothing is a combination of vintage apparel, like a 1980s Billy Joel shirt and a few Eagles pieces, and merchandise from small clothing lines such as Native 412, Moon Cat Creations, and the San Francisco based Reprezent Clothing.

Harris is also working with Tammeka Dennison, Jimmy Wapo’s mother, and carries Wapo hoodies and shirts for both men and women. All the money from those sales goes back to the late rapper’s family. Rebel Bred Clothing, a Pittsburgh streetwear line created by Nathan Brooks in 2016, joined the store earlier in the week with a launch party on Mon., Jan. 20, Martin Luther King Day.

The DJ Connection / Flower City Printmakers plan to have an official grand opening in April, giving them a few months to get their bearings.

“For the last six years, I’ve been a full-time DJ, I haven’t really had a real nine-to-five,” says Harris. “So, I’m still adjusting to the schedule.”