Pittsburgh's music scene looks a lot different than it did a year ago. Since the start of 2019, the ‘Burgh has gotten multiple new concert venues, fresh radio personalities, and a plethora of local music showcases. Here’s a recap of the latest additions:

When the McKees Rocks venue Roxian Theatre first opened in 1929, it was a vaudeville playhouse and movie theater. In 1980, it became a banquet hall and event center. In 2019, the Roxian re-opened as a midsized concert venue with the hopes of drawing more touring acts to Pittsburgh, and helping to revitalize the McKees Rocks business district. The venue opened in May with a show from jazz fusion band Snarky Puppy, and its upcoming shows feature an array of genres, including Yonder Mountain String Band and Common. 425 Chartiers Ave., McKees Rocks. roxianlive.com

After getting his start on 100.7 Star during the weekends, Chancelor Humphrey, best known for his popular Instagram account @KeepPittsburghDope, landed a weekday gig on WAMO (100.1 and 107.3) from 3-7 p.m. From eyes to ears, he’s now keeping Pittsburgh dope through our radio waves. wamo100.com

You can't keep 222 Ormsby down. The beloved Mount Oliver DIY space re-opened this spring under new ownership and started hosting events, including live music, zine release parties, open mic nights, and marketplaces. It hasn't exactly been smooth sailing since then — the borough issued a complaint in April — but it seems most of the kinks have been worked out and shows are planned throughout the summer. Just please, park legally and respect the neighbors. 222 Ormsby Ave., Mount Oliver.

Local radio jock Katie O, who works with both Big 104.7 and 105.9 The X, started a podcast, Scene Unheard, on iHeartRadio. The show focuses on the local music scene, and Katie O interviews a different musician for each episode. In the past, the podcast has featured Clara Kent, Smokey Bellows, and Chip & the Charge-Ups. Katie O uploads between 2-4 episodes of the podcast per month. iheart.com

Local music acts got a major boost this year with Pittsburgh's Very Own, a quarterly live series at Mr. Smalls, curated with the city's top talent. The event launched in February with a show featuring Mars Jackson, Benji., Isaiah Small, and Clara Kent. The series continues on Aug. 10 with a lineup that includes Inez, Leila Rhodes, Sierra Sellers, and Simone Davis. 8-11:30 p.m. 400 Lincoln Ave., Millvale. $10 advance/$12 at the door. mrsmalls.com

After 12 years on the mic for WYEP, radio host Cindy Howes returned to her home state to take a job at WERS in Boston. Pittsburghers were bummed to see her go, but thankfully her replacement, Liz Felix, has proven to be an excellent fit for the independent station and its listeners. Felix, who previously worked at stations in Cincinnati and Akron, took over the Evening Mix spot in March and has already garnered new fans by keeping the show true to itself and bringing fresh appreciation for the tremendous talent found in Pittsburgh's music scene. The Evening Mix on 91.3 WYEP. Mon.-Thu., 6-10 p.m. wyep.org

The longtime Lawrenceville bar and music venue is a hot spot for local bands and nationally touring acts. After closing for a couple years, the venue has recently expanded, but still offers an intimate showcase of musical talent. Its grand reopening has gotten pushed back a few times so far, but owners tell CP they plan to open the doors soon. Punk bands, electronic DJs, pop artists, and rock 'n’ roll legends will grace the Thunderbird stage upon its reopening. Its location on Butler Street places it right in the heart of the neighborhood, close to popular bars, restaurants, and shops. Open every day 11-2 a.m. 4053 Butler St., Lawrenceville. thunderbirdmusichall.com 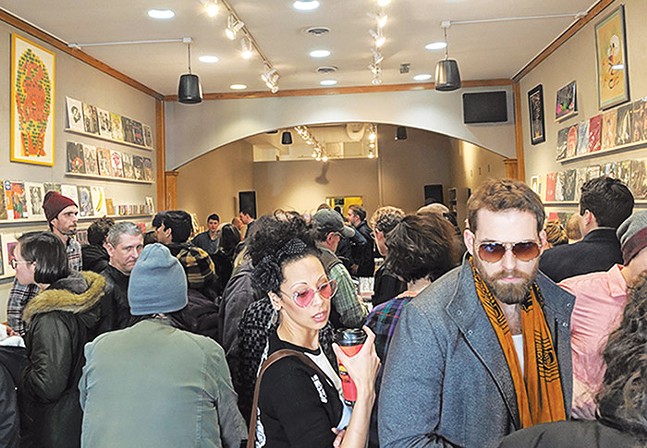 Libraries aren’t just about books. Patrons can take second-language classes, rent movies, and even listen to music. The Carnegie Library of Pittsburgh wants to make sure Pittsburghers can enjoy music from local artists, which is why they introduced STACKS, a program that promotes Pittsburgh musicians by making their albums available for streaming and download through the library. The program also pays artists a flat fee of $200 for their work (making that on apps like Spotify would require more than 23,000 plays.) Anyone can listen to the artists through STACKS, and those with a CLP library card can download the music for free. stacks.carnegielibrary.org

Since 1997, Creative.Life.Support has been providing career resources and financial assistance for musicians with classes, summer camps, and other programs. This year, the non-profit organization launched Creative.Life.Support Records, a record label to help document and distribute the music produced by participants in its programs. Releases so far have included Liz Berlin (founder of CLS), STARHEADBODY, and Black Coast Royals. 415 Evergreen Ave., Millvale. creativelifesupport.com

After ten years in Lawrenceville, Backstage Guitars announced plans to close its retail business this year, putting an end to the neighborhood’s distinctly music-focused shop. But local musicians, both aspiring and established, need not despair. The inventory may be gone, but owner Jason Cook ensures that Backstage Guitars will continue its repair service and lessons for guitar, bass, drums, ukulele, and piano. Open Tue.-Sat. through June. 4123 Butler St., Lawrenceville. backstageguitars.com

Eddan Sparks Trio has been hosting the That Was Dope! Open Mic & Jam Session at Enix Brewery in Homestead, and starting in July, the team plans to take the idea even further with the That Was Dope! Showcase. The event will feature hand-picked artists that consistently perform strongly at the brewery’s open mic nights, and each act will get a full 30-minute set. Wed., July 24. Times TBA. 337 E 8th Ave., Homestead. enix.beer

Pittsburgh’s downtown music scene is making a comeback. With a project called Music City Downtown, the Pittsburgh Downtown Community Development Corporation and James Street Promotions have been working to bring more live music downtown since the start of the year. See blues bands during Tuesday Blues Day at Wolfie’s Pub or jazz at the new Metropolitan Club (formerly Perle). downtowncdc.org 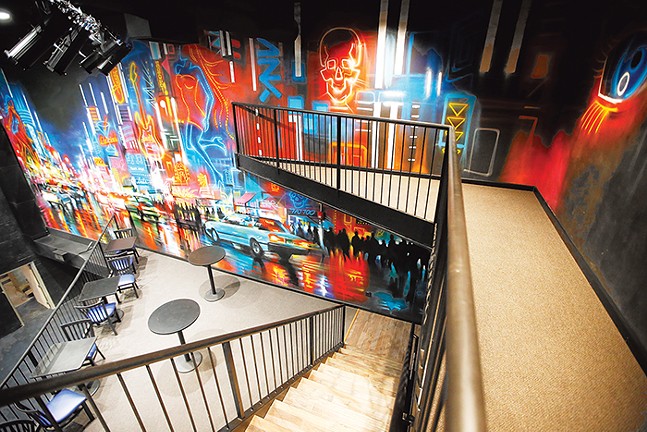 Half museum, half record store, Preserving Hardcore opened earlier this year in New Kensington. The owner, A.J. Rassau, has spent nearly 20 years in Pittsburgh’s hardcore/metal scene as a promoter, musician, and now, as a historian. In addition to the store, Rassau recently started holding shows at Preserving Hardcore. He hopes to make the spot a substance-free space where music fans of all ages can relax and have fun. 1102 Fourth Ave., New Kensington. preservinghardcore.com

The underground dance music scene in Pittsburgh craved for a reoccurring go-to spot, and Dissolv and Flux-Capacitor answered with re:vision, a new weekly dance night at Cattivo, which debuted in June. Every Friday, house, deep house, tech house, progressive, and techno bump from Cattivo’s basement, with the addition of special effects, full-stage sound, and light set up. 8 p.m.-2 a.m. 146 44th St., Lawrenceville. revisionpgh.com

Crafted Sounds, a local music label that began in a University of Pittsburgh dorm room, specializes in releasing music on cassette tapes. Now, the label has a blog to speak on the abundance of music that exists beyond the label. “On this site we hope to maintain a similar ethos found in our label operations as we aim share music that we think you will enjoy as much as we do,” reads the new blog. blog.craftedsounds.net

Oh, Squirrel Hill, will you ever get your live music venue? Apparently not for the foreseeable future, as The Marquee, a venue set to occupy part of the former Squirrel Hill Theater on Forward Avenue, missed its February opening date due to construction issues. As a result, scheduled shows were cancelled, tickets were refunded, and local music fans are left wondering if the project will ever happen. Finger crossed. 5828 Forward Ave., Squirrel Hill. facebook.com/themarqueepgh

On Wednesdays at Pizza Taglio, good food and funky tunes merge for a weekly all-vinyl pizza party. The event was started in May by DJ Paul Seif, who books parties under the moniker The Vinyl Dept., where attendees can eat, drink, and be merry. In addition to the music, the BYOB restaurant offers no corkage fee on specific wine/pizza pairings, and a special chef selection pizza. 8 p.m. 126 S. Highland Ave., East Liberty. facebook.com/thevinyldept

Found on the second floor of the Rivers Casino, the new 25,000-square-foot event space is home to trade shows, conferences, conventions, live music events, and more. R&B legends Kool & The Gang headlined the first concert at the North Side location in March, while George Clinton and the Parliament Funkadelic graced the stage in early June. See more throwback jams when KC and the Sunshine Band perform in July. 777 Casino Drive, North Side. riverscasino.com/pittsburgh

Many know of the weekly Banjo Night at the Elks Lodge #339 in the North Side, but this year, the venue launched Honky-Tonk Jukebox, a new monthly show featuring country music classics from Willie Nelson, Loretta Lynn, and more, performed by local country and roots musicians. The event is hosted by Jon Bindley of local Americana band, Bindley Hardware Co. The music is also backed by the #339 House Band. 400 Cedar Ave., North Side. facebook.com/honkytonkjukebox

North Side's already burgeoning music scene got another boost when a new record store, The Government Center, opened in March. Sure, there are thousands of LPs and 45s, and regular sales and specials, but the multi-level space is much more than that. It's also part-community space, part-venue, and generally just a place for people to get together and talk about music. 219 E. Ohio St., North Side. facebook.com/thegovtcenter