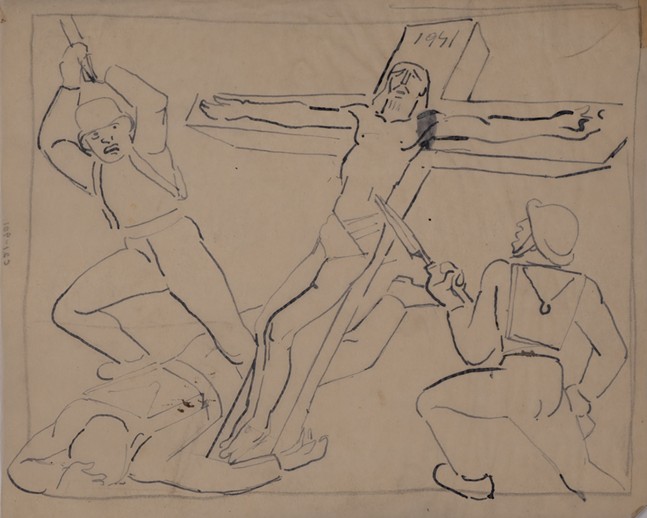 Society to Preserve the Millvale Murals of Maxo Vanka
Study sketch for the mural "Christ on the Battlefield" from the Vanka Collection.
The St. Nicholas Croatian Catholic Church in Millvale has become famous as not just a house of worship, but as the site of breathtaking murals by Croatian-American artist, Maximilijan “Maxo” Vanka. Now the murals have been expanded upon by an extensive, newly donated collection of never-before-seen works by Vanka.

The Society to Preserve the Millvale Murals of Maxo Vanka (SPMMMV), a local nonprofit dedicated to conserving and educating the public about the murals, officially announced yesterday that it received more than 130 drawings and sketches created by Vanka from 1937 to 1941. The works were gifted by Vanka's granddaughter, Marya Halderman, and her husband, John, last December.

“We are incredibly grateful and honored to receive this gift from Marya and the family,” says Matthew Falcone, president of the SPMMMV board of directors, in a press release. “This gives Pittsburghers greater access to Maxo Vanka’s body of work and the ability to see, firsthand, his diversity and skill as an artist who made a lasting impact on our region and across the country.”

Born in Zagreb in 1889, Vanka emigrated to the U.S. with his wife and daughter in 1935. Two years later, the artist was commissioned by Father Albert Zagar, a priest at St. Nicholas Croatian Catholic Church, to paint the murals. Completed in 1941, the two sets of 22 total murals depict religious themes but are better known for their stunning imagery commenting on the horrors of fascism and war (Vanka was a noted pacifist), capitalist greed, and the immigrant experience.

“It is so fascinating to see my grandfather’s works together – and to be able to share them with the wider community,” says Halderman, who lives in Bucks County, Pa. “The power of his work is that it is universal; you see the humanity and the inhumanity.”

Overseeing the collection is Dr. Sylvia Rhor, director and chief curator of the University Art Gallery at the University of Pittsburgh. Rhor is currently focusing her research on the murals of Pittsburgh from the 1930s and '40s, including Vanka's contributions, and believes the collection shows that the artist had a more intimate relationship with the city than previously assumed.

“You can almost map his walks through Oakland in 1935,” says Rhor, referring to a 1935 trip Vanka took to Pittsburgh and other industrial cities in the U.S. before the church commissioned him. “I think that it breaks the notion that he holed up in Millvale and had no connection to the city.”

Anna Doering, managing director of SPMMMV, adds that correspondences Vanka wrote at the time demonstrate the impact Pittsburgh had on him. While about half of the collection contains sketches of what would become the murals, the other half focuses on various scenes of the city at that time.

“He just fell in love with Pittsburgh,” says Doering, adding that he originally spent around two weeks roaming and sketching the city, and took regular breaks while painting the murals to explore it further.

“Vanka never sat still for very long and always had a sketchbook in his hand,” says Doering, describing how many sketches in the collection are of Pittsburgh's rivers and bridges, as well as landmarks such as the Cathedral of Learning.
click to enlarge 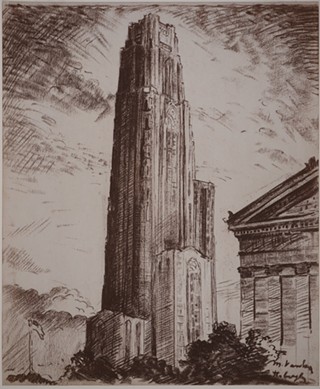 Society to Preserve the Millvale Murals of Maxo Vanka
Sketch of the Cathedral of Learning from the Vanka Collection.


Because of this, Rhor and Doering believe the collection enables them to tell Vanka's story outside the church and murals.

“We see the collection as telling another part of the story of how [the murals] came to be, what was Vanka's thinking behind them,” says Doering, “but also the collection, by having that section on Pittsburgh, really reinforces the regional significance and the national significance, because he was also putting [what was happening in Pittsburgh] in the context of what was happening in the country at the time.”

Because the collection can also be displayed outside of the church, Rhor sees it as a way to make more people aware of the murals, which she views as being obscure despite their artistic and cultural significance. Rhor goes on to describe how, even as a graduate art student in Pittsburgh, she was never made aware of the murals, something that she found was not exclusive to her.

“It's amazing how many people I know still haven't been to see them,” she says.

Once she did visit the church, her reaction was nothing short of amazed. “I was raised Catholic and have seen so many murals, and when I walked in there the first time, I felt like I had to pick up my jaw from the floor,” she says.

While the public has been able to view and learn about the murals through exhibitions and tours led by SPMMMV, the new drawings and sketches are, for now, largely unavailable to view due to the COVID-19 shutdown. On Wed., May 20, Rhor will host Table Talk: Introducing the Vanka Collection, a Zoom event introducing the community to select works from the collection.

For now, Rhor says she and SPMMMV are more concerned with being “good stewards” for the collection by organizing and cataloging the pieces. Doering says they also plan on reaching out to various cultural partners in the city, including the Senator John Heinz History Center and the Carnegie Museum of Art, to try and find a future venue to show the collection, as the church lacks a gallery space. 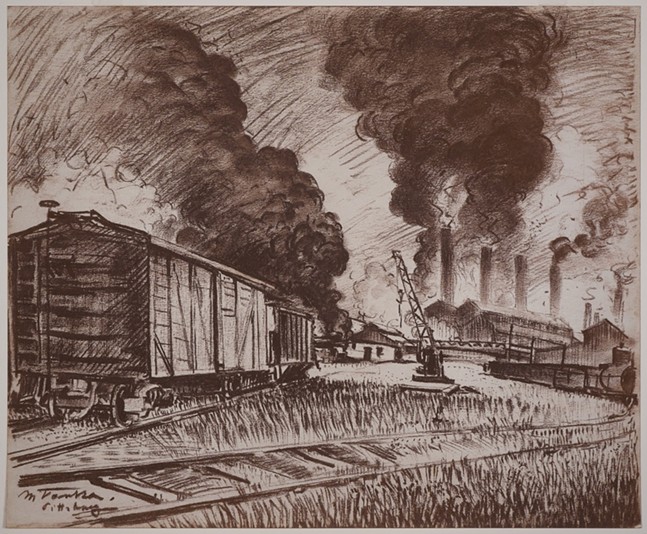 Society to Preserve the Millvale Murals of Maxo Vanka
Pittsburgh factory scene from the Vanka Collection.
Overall, Rhor foresees using the collection as a way to educate people, not only on Vanka's legacy and his process but on the social issues in his works that still resonate heavily today, especially those concerning immigration and labor.

“How can we use this collection to build bridges, to build partnerships, to rethink some of these same issues in a contemporary context, we are still dealing with a lot of these issues. I hope that this can be a conduit for that, thinking about bigger issues and bigger ideas of community.”