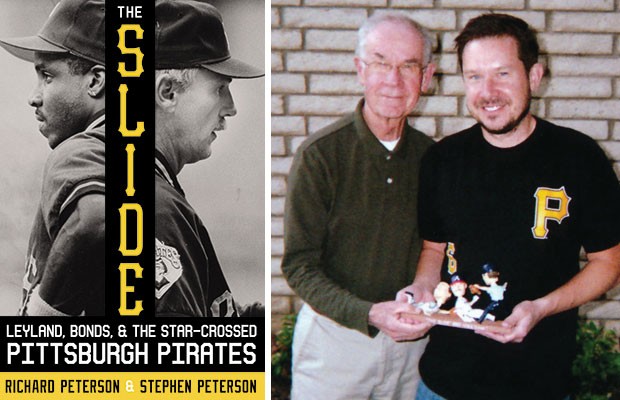 Photo courtesy of Anna Peterson
Richard and Stephen Peterson hold a bobble-head version of the famous slide play referenced in The Slide.

If you are a Pirates fan of a certain age, the most tragic image of the last 25 years is Atlanta Brave Sid Bream sliding across home plate to win Game 7 of the 1992 National League Championship Series. Bream would send his new team to the World Series and his old team, the Pirates, home.

Immediately thereafter, the Pirates fell into a 20-year slump of losing and irrelevance. If you want to torture yourself reliving the heartbreak of this moment, and the many that followed, University of Pittsburgh Press will release The Slide: Leyland, Bonds & the Star-Crossed Pittsburgh Pirates, written by the father-son team of Richard and Stephen Peterson, on March 31.

“There are two great baseball stories. One is the team that goes on to win the championship. The other is the team that glimpses paradise but never quite gets there. One’s comic and the other is tragic,” Richard Peterson told City Paper recently via telephone from his home in Makanda, Ill. Richard Peterson grew up in Pittsburgh, taking in games at Forbes Field in the 1950s; he remains connected to the city, in no small part through his love for the Pirates.

The Slide starts in the aftermath of the 1979 “We Are Family” World Series championship, chronicling the dark years that followed as the team slid from champion to the worst team in baseball in just two short years. It covers not just the Pirates, but civic life and economic life in Pittsburgh in the 1980s, some of the toughest years Pittsburghers have endured. The team would have left the city in 1985 without the extraordinary efforts of then-Mayor Richard Caliguiri, who put together an ownership group called the Pittsburgh Associates, keeping the Buccos in town.

In addition to all the losing and the possible moving, the franchise was reeling from the Pittsburgh Drug Trials. Several current and former members of the Pirates, including Dave Parker, Dale Berra and John Milner, were called before a grand jury in September 1985 to offer testimony on the purchase of cocaine at Three Rivers Stadium. Even the person portraying the Pirate Parrot was implicated. It was a serious black eye on the franchise, and the city.

The Slide also covers the 20-year losing streak from 1993 to 2012, some of the toughest years that any baseball fans have ever endured.

But the meat of the book deals with the ball club drafting and acquiring talent such as Barry Bonds, Bobby Bonilla and Doug Drabek and advancing to three consecutive League Championships Series in 1990, 1991 and 1992. It moves along briskly because personalities like Bonds and skipper Jim Leyland make for compelling prose.

Then, of course, there’s “the Slide.” Sid Bream’s slide, sure, but also the franchise’s slide into absolute futility after being unable (or unwilling) to retain talent like Drabek, Bonds and Bonilla.

Bonds does not come off well in this story, which will be no surprise for baseball fans. However, Kevin McClatchy, who purchased the team in 1995 (saving major-league baseball in Pittsburgh for the second time in just over a decade) and who is responsible for pushing through the construction of PNC Park, is one of this story’s heroes. As Peterson says, “Without PNC Park, there would be no Pirates; without Kevin McClatchy, there would be no PNC Park.”

That should resonate for fans gearing up for the 2017 campaign. Even with the most beautiful ballpark in MLB, and even with a talented team (albeit one coming off a deeply disappointing 2016 season), fans worry that the Pirates will never spend enough money to compete with the likes of the Cubs and the Cardinals. And that’s a legitimate fear. Even with players like Gregory Polanco and Starling Marte under contract for some time, the Pirates have a history of developing, but not retaining, talent. Says Peterson: “As soon as free agency comes into play, it becomes a part of Pirates history and it continues today. Developing teams and watching these great players reach the point where the Pirates either can no longer afford them. Or think they can’t.”

Richard Peterson speaks at the Mount Lebanon Library at 7:30 p.m. Thu., May 4, about the history of African-American baseball players in Pittsburgh. At 6 p.m. Fri., May 5, Peterson will sign copies of The Slide at the Barnes & Noble at the Waterfront in Homestead.