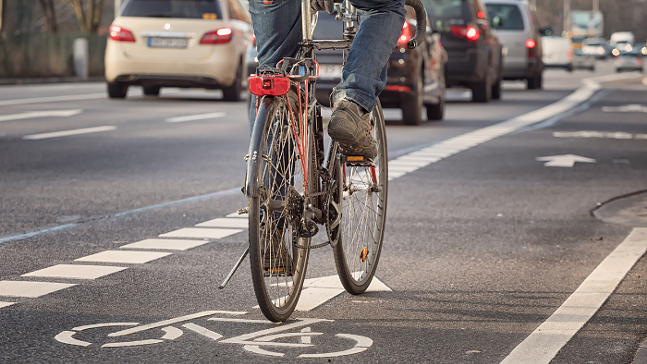 Pittsburgh’s interest in biking is increasing, doubling to 2% of people commuting by bike over the past decade, and safer and more accessible bike infrastructure is following the trend. On July 31, the Department of Mobility and Infrastructure began construction of bike lanes and speed humps on California Avenue on the North Side as part of Pittsburgh's Bike(+) Plan.

Once in place, the bike lanes will stretch between Brighton Road and Marshall Avenue along California Avenue in the California-Kirkbride neighborhood. The roughly 0.8-mile stretch sees a significant number of speeding drivers, according to city officials, so three speed humps between Columbus Avenue and Marshall Avenue will also be installed, along with permanent signage and pavement markings, to alert and slow motorists.

Image: Courtesy City of Pittsburgh
Birds-eye view of California Avenue between Marshall Avenue and Brighton Road
Data collected in fall of 2020 shows that 97% of vehicles on California Avenue exceeded the 25-mph speed limit, with an 85th percentile speed of 43 mph. The city says that the addition of bike lanes prompted the need to address these excess motor speeds, as bicyclists will now have bike lanes to connect them to existing bike lanes on Brighton Road and Marshall Avenue.

The Bike(+) Plan will add 150 miles of safe bicycle facilities to Pittsburgh’s bike system in both extended routes to major job centers as well as neighborways in low-volume and residential areas. As part of the Bike(+) Plan, the California Avenue bike lanes will connect the California-Kirkbride neighborhood to other North Side neighborhoods as part of a bike network that the city hopes will incentivize people to use bikes for short trip,s as well as potentially longer commutes.

Image: Courtesy City of Pittsburgh
Existing conditions on California Avenue near Brighton Road
This addition to North Side’s streets complements other efforts by local organizations such as Walk Ride Northside’s We Like Bikes! Program, which partners with local businesses to provide bike racks and repair toolkits to bicyclists and encourage cyclists to patronize local businesses.