DeMarco, an Allegheny County Councilor, told WESA that “the status quo is going to change” when referring to the recruiting of more high-quality Republican candidates.

But DeMarco might be changing the status quo in other ways too. For example, party chairs tend to keep a low, uncontroversial profile in hopes of appealing to the widest possible net of voters. But DeMarco’s Twitter account showcases anything but that.

Several tweets over the years show DeMarco supporting the dubunked conspiracy theory that hundreds of thousands of undocumented immigrants are voting in American elections — some going as far back as 2014.

In March, DeMarco tweeted that Democrats were “shopping for new [constituents] to tell false promises to. House votes in favor of illegal immigrant voting.” The accompanying link shares the same headline, but the story is about House Resolution 1, a campaign finance bill. Right-wing pundits and politicians claimed this bill expanded voting rights to non-citizens, but FactCheck.org said these claims were false. 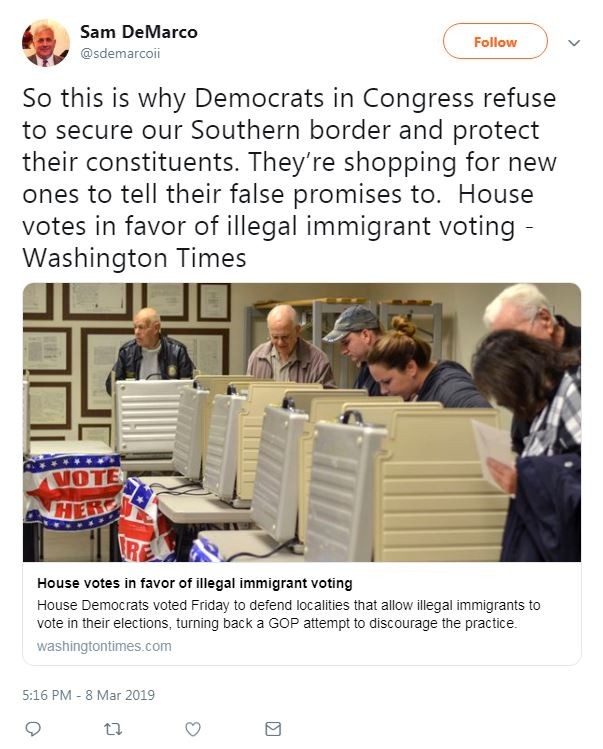 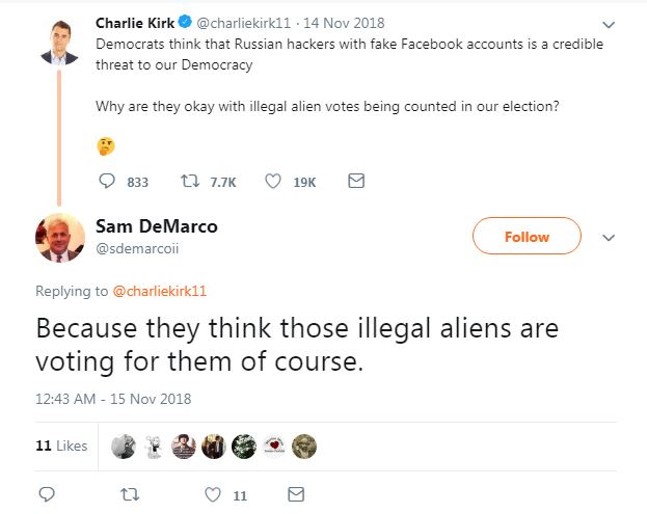 In June of this year, DeMarco retweeted a tweet from Tom Fitton, the president of controversial right-wing nonprofit Judicial Watch. The tweet claimed that 900,000 undocumented immigrants voted in the 2018 elections. According to the New York Times, courts have dismissed the vast majority of Judicial Watch’s lawsuits.

These mass undocumented voter fraud claims have been debunked by fact-checkers over the years. A 2017 study from the Brennan Center for Justice looked at election data across 42 jurisdictions and 23.5 million votes in the 2016 election and only found an estimated 30 incidents of suspected non-citizen voting for further investigation or prosecution. That is 0.0001 percent of the votes.

DeMarco says his past tweets are not reflective of his views today.

“When I made those statements on Twitter, those were based on news articles,” says DeMarco. "Which gave me the impression that they were true at the time. … Twitter is the wild frontier. I can't say what motivated me at the time.”

Some of DeMarco’s tweets linked or replied to news articles from the Washington Times and the Penn Capital-Star, while others were merely replies to or retweets of right-wing figures.

DeMarco says in his new role as Allegheny County GOP chair he recognizes that he speaks on behalf of Republicans in the county. He says he will use social media to send out accurate information. DeMarco says there is no evidence of millions of undocumented immigrants voting, but adds he believes the county and state need to do more to shore up election protections.

He shared emails with City Paper that showed a 2017 correspondence with former Allegheny County Election chief Mark Wolosik, where Wolosik wrote there were 98 non-citizens registered to vote in Allegheny County. But 59 have never voted. (Some non-citizens are automatically, and accidentally, registered to vote when they acquire drivers' licenses, an issue the state is working to correct.)

In the last three presidential elections, only nine non-citizens voted in Allegheny County. Over those three elections, more than 1.93 million ballots were cast in the county — meaning the nine ballots from non-citizens, who may or may not be undocumented, made up 0.0004 percent of the total votes. Estimates also show that the Pittsburgh region has some of the lowest numbers of undocumented immigrants of any region in the country.

DeMarco says those votes could have more effect in smaller turnout municipal races, which can be won by a small number of votes, but he has yet to discover the figures on non-citizens voting in those contests.