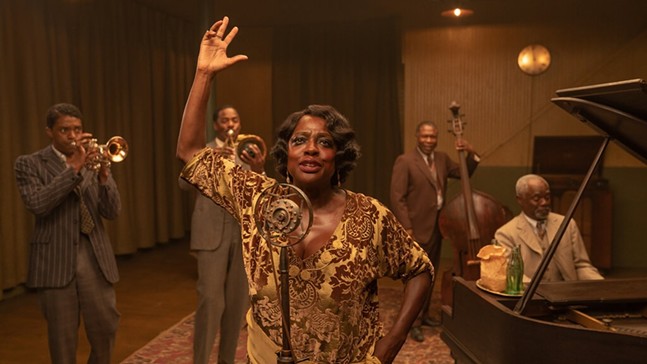 Photo: Netflix/David Lee
Viola Davis as Ma Rainey
In July 2019, Pittsburgh's North Side became 1920s Chicago for the filming of Ma Rainey's Black Bottom, an adaptation of the August Wilson play of the same name. Netflix announced today that the film would premiere on the streaming service on Fri., Dec. 18.

The announcement is bittersweet, as Ma Rainey stars actor Chadwick Boseman, and was his final movie before his death on August 28.

The film explores Black life in Chicago during the 1920s, centering the work of real-life pioneering Blues singer Ma Rainey (Viola Davis). Boseman stars as Levee, Ma Rainey's trumpet player who has ambitions for greater success. The film is directed by George C. Wolfe and produced by Denzel Washington, who, along with Davis, starred in the 2016 adaptation of Wilson's play Fences, which was also shot in Pittsburgh.

“Now we have the unfortunate knowledge that Chadwick succumbed to cancer at 43, but really, Levee represents so many Black men living in America," said Davis in an interview with the New York Times. "What we’re constantly navigating on a day-to-day basis is the trauma of our past — we’re trying to heal from it, we’re even trying to understand that it’s there, and we’re negotiating that with our dreams and who we want to become.”