“But no one ever thought in 20 years it’d still be going!” 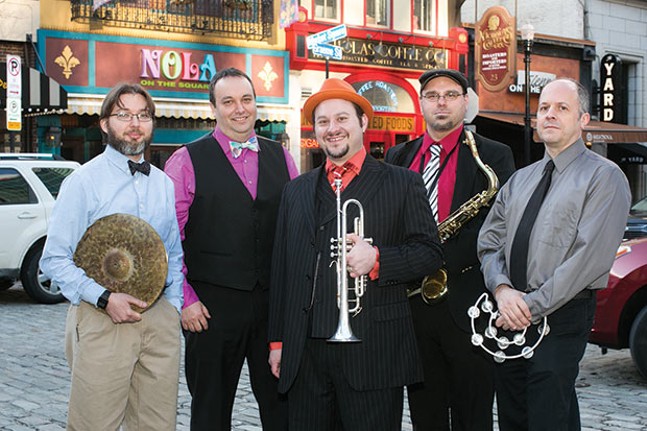 “We never thought we would play anything past the one show,” says Urick, NSX’s lead vocalist. “We had such a great time that we decided to just keep doing it. But no one ever thought in 20 years it’d still be going!”

The band began as a cover act under the name Neon Spam X-Perience, because the members wanted the name to include an element from the periodic table (neon), as well as a misspelling. “We were so nerdy,” laughs Urick.

But NSX was worried about copyright issues stemming from the canned-meat product. But they wanted to keep the same initials, so “Spam” was changed to “Swing.”

“Swing made sense, because we’ve always had horns in the band. Why not lean into that sound?” says Urick.

Growing up, Urick had a close relationship with his grandfather, and the two would listen to big bands and Louis Armstrong. “He had played in a band for 65 years, and he played a lot of the same music we ended up covering,” says Urick.

But Neon Swing is not your traditional swing band.

“We have elements of classic swing, but we picked up lots of other genres along the way, too,” he says.

To mark its 20 years, the band is releasing We’ve Only Just Begun, a 15-song album with originals, covers and reworked classics from the band’s tenure. It is the band’s eighth release, and it features energetic covers of songs like “I Wanna Be Like You,” from The Jungle Book, and “In Heaven There Is No Beer,” a polka standard. It also features originals like “275 Miles,” a song about the time that Urick spent driving 275 miles back to Pittsburgh to play with NSX when he lived in Cincinnati. Then, there’s “Thomas, WV,” a song about the band’s first, but comically unfortunate, out-of-state show.

“For our 10-year-anniversary album [Here to Stay], we went for more of a ‘best of’ feel. But this record was more about having fun and picking songs that had meaning for us, and seeing how it would all hang together,” says Urick.

Twenty years is a long time to be a band, and there’s bound to be some personnel changes. About 40 members have rotated in and out of the ensemble, and the group currently performs as an eight- or nine-piece. The current lineup, as featured on the album, is as follows: Urick sings and plays trumpet and nose flute; Walter Hunter plays saxophone, clarinet and trumpet; Joe Palacki mans the drums and percussion; Steve Tomkowitz sings and plays saxophone; Dave Frye riffs on the guitar; Chris Dufalla sings and plays trombone; Carmen Marotta plays piano and keys, and sings; and Ken Reeser and Randy Miller take turns sharing bass duties, depending on who is free for the many gigs that NSX performs.

“The first tour that we did was a lot of fun, and at the time, I was at the point where I was thinking I wanted to slow down, maybe be done with it. But we figured, let’s go on the road and give it a shot,” explains Urick. “It was so much fun that we didn’t want to stop doing it.”

The group has also performed on the same Central Park stage in New York City where Duke Ellington’s band performed, and have played at big rockabilly festivals like Viva Las Vegas.

NSX is now an institution in Pittsburgh. The band performs each month at NOLA on the Square, and this year, Pittsburgh City Council proclaimed April 13 to be “Neon Swing X-Perience Day.”

In an effort to catalog its legacy thus far, the band will perform two sets at the Hard Rock Café this Friday. The first is a performance of We’ve Only Just Begun in its entirety, and the second set is a mix of “best of” songs and requests from the audience.

“We’re trying to use [the second set] to hit some things that didn’t make it to the album that means something to us, and also to be able to take requests from our repertoire,” explains Urick. “Rehearsing for the second set has been kind of fun, because it’s a work in progress.”

Urick is just excited to share the album with NSX’s fans, and to perhaps get people dancing the night away.

“The bottom line is, we just want people to have a good time and enjoy the album,” says Urick. “It was really a labor of love putting it together, and we just hope people enjoy it as much as we do.”