Neon Hitch leaves Warner Brothers, wants her fans to be her label

"I'm raising money to hire the fans to do what people from a label would normally do. But my fans would do it more passionately." 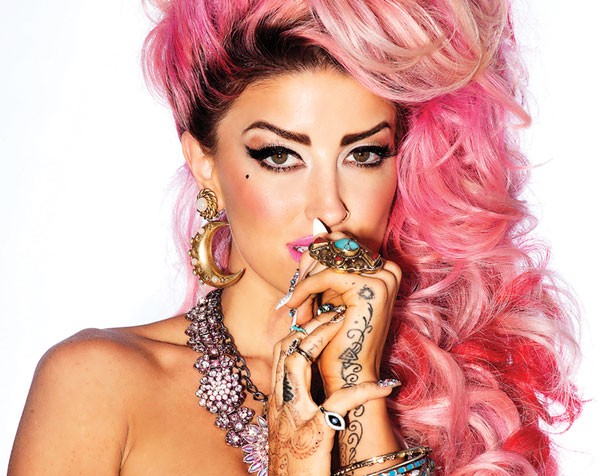 Having a yard sale: Neon Hitch

Neon Hitch grew up in a circus family in England, became a singer in her early 20s, and once lived with Amy Winehouse. She spent four years signed to Warner Brothers, and despite having two songs that hit No. 1 on the Billboard Dance Club Songs chart, she never had a full album released by the label. She left Warner this year, and recently started an Indiegogo campaign to fund her forthcoming album. She talked to City Paper via phone two days after the campaign began, at the start of her Yard Sale Tour, which brings her to the Delta Foundation's "Nightmare on Hellsworth" event this weekend.

So, 48 hours into your Indiegogo campaign, you're at over $16,000 raised. How do you feel about the project so far — is it meeting your expectations?

Yeah! It's really inspiring to take my freedom back and have the support of my fans. I think people want to see me do well, and I think my fans are happy that I'm doing this independently — it's liberating!

What led to you part ways with the label?

I wanted to put an album out; I'm always making music, so the album wasn't coming out, and by the time I was like, "OK, let's do this," I'd made another album. I'm always creating; I don't want to be creating and [have] it going to waste.

Yeah — it's all new music, it's not old stuff, but yeah. Eluetheromaniac. I'll be performing songs from it on the tour, and people will get to see what it's all about.

The Indiegogo isn't just to fund the album; you want to create a "fan label." What does that mean?

My fans are incredibly talented, and very passionate, and work very hard, so they basically are my label. This label I'm building, We Are Neon, is the fans. I'm raising money to hire the fans to do what people from a label would normally do. But my fans would do it more passionately.

Will the fans be making business decisions, or does that all come down to you?

This is my project, and I'm the ideas person and the decision-maker. But I have organizers; we don't want it to all be a random mess. It's basically like I'm the head of the label, then I have people below me to organize.

How does the "yard sale" concept play into all this?

I was like, "What's the best way to get rid of the old emotional baggage? Have a yard sale!" It's emotional cleansing, and it's a great concept for the tour, because I'm bringing actual yard-sale items — like, costumes I've worn — and that'll be part of the stage props, an actual yard sale. And people can bring their own stuff and sell it at a physical yard sale, so kids can make their own money to pay for the ticket. It's a really cool concept: It's interactive!

Do you have an idea of when the new album will come out?

I have a date in my head which I'm sure my fans can figure out — they know my numbers. But I'm not announcing an actual date right now.