Neo-Goths Psyclon Nine keep up with the End Times

With a diabolical horror-flick sample melding into a pounding power-industrial beat, a blast of dark-ambient harsh noise called "Bellum in Abyssus" begins Psyclon Nine's third and latest CD, Crwn Thy Frnicatr. With such a promising introduction, you'd think the band would keep the proceedings as brooding and evil as possible.

And lyrically, they do: Frontman Nero (a.k.a. Eric Gottesman of See Colin Slash) tears his throat apart black-metal style, while the whispered, demonic utterances rival Skinny Puppy's best. But the moment the cheesy, technoid synth line comes in, the illusion is destroyed -- at least for me.

It might have a very different effect on Psyclon Nine's target audience, a wave of neo-gothic/industrial youths who grew up with rave techno and futurepop invading the rivethead clubs at the turn of the millennium. To them, a shout-along dance-floor anthem like "Better Than Suicide" is the stuff they've been salivating for. And since it's from the leading label of the scene, Metropolis Records -- and several shades more intense than VNV Nation -- they'll take it at face value.

When Marshall Carnage and Josef Heresy originally decided to form Psyclon Nine, their sound was more oriented toward guitar-driven coldwave, and tracks like "Anaesthetic (For the Pathetic)" still bear evidence of the influence of Ministry, KMFDM and even a bit of Front 242. But then they changed course toward the more cyberpunk blend of aggro-industrial attack entering the scene in the '90s, and haven't looked back.

That knack of keeping up with the End Times, and the typical, transgressive, apocalyptic lyrics that permeate Crwn Thy Frnicatr ("In God the taste of sulfur and rain / The Christ now turns on man and brings him pain") will endear Psyclon Nine to the legion of baggy pants and buckled boots. Cyber-metal sorties complete with double-kick drum machine, such as "Scar of the Deceiver" and "Crwn Thy Frnicatr," won't hurt them with the headbangers, either.

Even though Hot Topic darlings like Amy Lee are making the spooky vibe safe for suburban schools, a band like Psyclon Nine can still give soccer moms twitchy fits when blaring from a son's upstairs bedroom. He's playing Halo now .... but tomorrow, will he open fire on the cafeteria? Probably not. He's just waiting for a rare chance to see a band like this work its black magic live, instead of from behind a DJ booth. 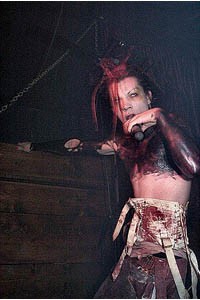