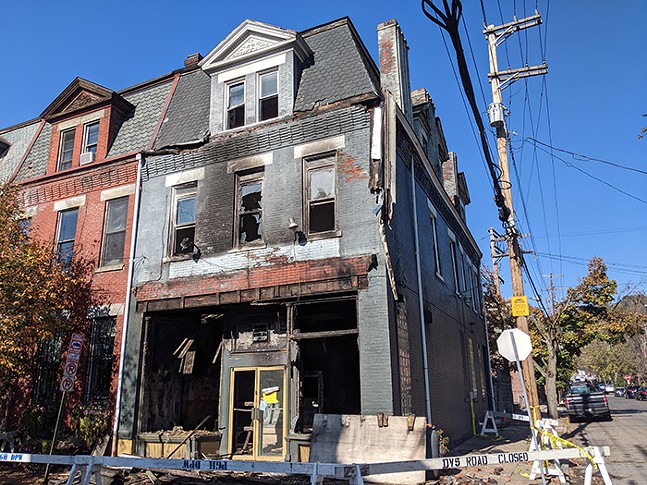 CP photo: Lisa Cunningham
After the fire: Wilson's Bar-B-Q on North Taylor Avenue in Pittsburgh's North Side on Wed., Nov. 6, 2019
On Tuesday evening, Wilson’s Bar-B-Q on the North Side was gutted by fire. The flames ripped through the restaurant’s 59 year legacy, leaving owner George A. Wilson Jr.'s business in ruins.

The family was fortunate to have made it out of the building safely, and now, Pittsburghers are coming together to help revive Wilson’s legendary barbecue. Jonathan C. Iams and Michele Petruccelli, “friends and neighbors of George Wilson,” started a GoFundMe Thursday to bring the restaurant back to the Mexican War Streets neighborhood.

“We miss him so much already!!” the pair writes on the fundraising page. “I miss waking up to the smell of the ribs cooking!”

Throughout the week, neighbors continued to stop in front of the North Taylor Avenue restaurant to look at the damage and pay their respects. "We're all mourning the loss," said one woman, standing across the street from the building as others stopped to take photographs.

CP photo: Lisa Cunningham
Firefighters inspect the damage on Tue., Nov. 5, 2019.
Wilson Jr.’s father, George Wilson, brought his Louisiana and South Carolina-influenced barbeque to Pittsburgh in 1960; Wilson Jr. took over the shop after his father’s passing in October of 2018; and, for almost six decades, the menu at Wilson’s never changed. There was always ribs and chicken, both house-smoked, and a few sides.

“This is real food,” Wilson Jr. told Pittsburgh City Paper earlier this year. “This is the real deal. Everything is still done the old-fashioned way. No shortcuts.”

The building does not appear to have been insured, according to the Pittsburgh Tribune-Review. At press time, almost $2,500 has been raised towards the GoFundMe's $100,000 goal.

"I talked to George this morning and he is sincerely appreciative of the outpouring of love, friendship, and support," Petruccelli posted on the GoFundMe page. "He is totally supportive of this initiatve and asked me to pass on his great big 'THANK YOU!' to everyone!!!!!"