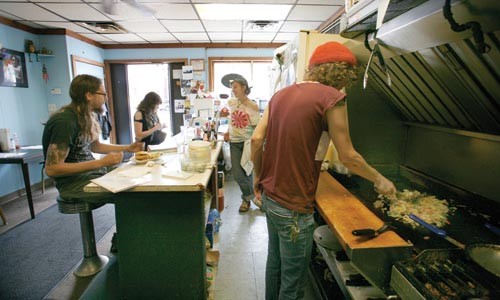 Despite its popularity, the Bloomfield Sandwich Shop is having financial troubles.

For the past half-dozen years, the Bloomfield Sandwich Shop has operated under a simple philosophy: "Everybody eats."

"My mother was always the one who said, 'We can throw an extra potato in the pot,'" says owner Ros Dukes, while cracking a few eggs behind the counter.

But good karma doesn't pay the electric bills. The Liberty Avenue diner has been in business "long enough to be in debt to everybody and their mother," says Dukes.

As a number of crayon drawings, placards and decorations indicate, the Sandwich Shop takes a hippie's approach to business, seemingly more concerned with making people feel welcome than emptying their wallets. The service is casual, but the prices are rock-bottom: Two eggs with potatoes and toast costs only $2.29.

The Shop has developed a loyal following, but hasn't yet made it into the black. So this autumn, some customers are trying to give back to the tiny diner that has given to them in the past.

"They feed everybody that doesn't have a place to go," says Jillian Flechenstein, a one-time regular customer, recently hired staffer and organizer of a benefit concert this month. She says the Oct. 3 concert at Belvedere's raised about $1,000 to keep the shop going. Trautman was one of the performers.

Dukes says she was taken aback by the turnout. "That was amazing," she says. "We caught up on a couple bills with that."

Shop staffer Adam Staniszewski thinks the benefit concert was a sign of reciprocal goodwill. "That shows the absolute loyalty of the fan base," he says. And with another $1,500 they will be where they need to be, he predicts -- adding that there will likely be another benefit concert in the next three months.

In the meantime, the shortfalls have already required some personal sacrifices by Dukes, a 52-year-old Western Maryland native who moved to Pittsburgh in 1987. She's been working as a cook or restaurant manager locally ever since, took over the diner about six years ago and inherited some debt along with it. She even considered skipping a family reunion, but customers and employees wouldn't let her.

The shop doesn't plan to change its philosophy, or to abandon such traditions as its annual Thanksgiving turkey-dinner giveaway. "Anybody that doesn't have a place to go, please come here," says Mike Miller, Dukes' partner in business and in life. The first year the shop offered the meals, it "didn't even have fliers," Miller says. "We opened the doors and put a sign up that said, 'Free turkeys.'" Miller expects to serve eight or nine turkeys this year.