The student had become (sort of) the teacher.

Shreejoy Tripathy was observing the dicing of green peppers, garlic and herbs while teaching his mother's Indian mushroom-curry recipe, when 28-year-old Eliza Bishop held up a mushroom from a nearby table.

"We should technically be peeling these," the Observatory Hill resident suggested. "I went to India. That's what they do there."

A brief exchange on the topic ensued, as most were surprised to learn such a thing. That led to other tips, like soaking the potatoes in water so they don't brown, or how to make rasam powder (an Indian spice rub). The group of 18 or so would have otherwise all been strangers, if not for a desire to learn how to cook Indian food through CommuniTeach, a learning-exchange program that brought them together on this June night in Bloomfield.

Funded locally by the Sprout Fund, CommuniTeach is the brain child of Pitt graduate student Ben Paul and Sarah Press, a management consultant in Chicago. Their idea is simple: Pair people who want to learn something with someone who can teach it, for free. No special requirements to teach or learn necessary. And organizers believe that removing money from the equation will help change how the public perceives learning.

"People think of teaching as a service and 'I pay you for it,'" Paul says. "We want people to think everyone's a teacher and everyone is a learner and there is no need to bring money into the equation."

Press' conception of the idea started at the University of North Carolina in Chapel Hill, where she frequently fell asleep on a lounge couch, only to be awoken for class by a housekeeper. Compelled to return the favor after multiple wake-up calls, Press helped the worker's daughter with her homework. That led her to create SWAT, or Student-Worker-Alliance-Tutoring program, which pairs college-student tutors with workers' children.

That eventually sparked an idea to create a more wide-ranging, community-based program, and Press paired with Paul and another friend, Ted King, to develop and implement the idea.  Pittsburgh's focus is on the grassroots, and individuals facilitating LearnIts (like the Indian cooking one).

"We're trying to transform relationships and help people realize you don't have to go to the experts to learn something and you don't have to be paid to share those skills," says Press. "Everyday people can share their skills. It's empowering to have people teach them."

The CommuniTeach website (www.communiteach.com) is its own kind of social network that emphasizes connecting people in person. Users create profiles based on what they can teach and want to learn, and the site connects you to a match, or you can seek one out on your own, to set up a "LearnIt," whether one-on-one or in a group. There is also an online quiz to help you figure out what you might teach if you're not sure, and CommuniTeach provides the equipment and most are held in public spaces.

"People always say they have nothing to teach, but that almost always turns out to not be true," Paul notes. "I always tell them, 'I know how to cook two things. If you can teach me a third thing, that's something I want to know.'" No subject is off limits: Parallel parking; home-brewing; knitting; or even "how to run," from an Antarctican super-marathon runner.

Want to learn how to make a laptop bag out of duct tape and bubble wrap? Squirrel Hill resident Mona Abdel-Halim did, and she learned it in exchange for teaching the artist how to do social-entrepreneurship strategies.

In Bishop's case, she was familiar with the program, having taught yoga for a LearnIt back in April. And for her, it wasn't just about learning how to cook the cuisine of a country where she spent two years, and hopes to move back to. "I love preparing meals communally, so I really love this," she said. "There's more love that goes into the food. It's something we all share."

The LearnIts are popping up around the city, in neighborhoods like Polish Hill, Shadyside and Friendship. At just over a year old, Paul believes the program is at a turning point toward becoming self-organized. The June 3 Indian cooking LearnIt was the largest so far, Paul says.

The group divided into teams at tables set up with ingredients and cutting boards. They took turns chopping, dicing and stirring the ingredients in skillets sizzling with oil and coriander on the stove. Tripathy offered his own tips and knowledge as a Ph.D. student in neural computation at Carnegie Mellon University: "We're the only species on earth where spices are used as a food." That led to a friendly debate, until the food was ready, about the existence of human pheromones. Someone went and picked up some beer. Then they ate and talked.

Inga Jensen, a 51-year-old Regent Square resident, noted the energy in the room. "It's interesting to see this play out and watch how wonderful the spirit of generosity is," she said.

Which is ultimately what CommuniTeach organizers hope for. It's not just the skill exchange they hope to facilitate, Paul says, but a sense of community.

"We're on the ground floor of changing the world, right here in Pittsburgh and [the participants] will be the ones doing it," Paul says. "How cool it would be if the whole world over, people were teaching and learning from one another." 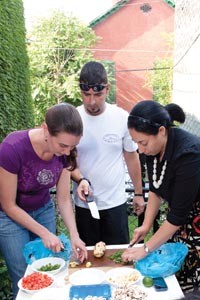